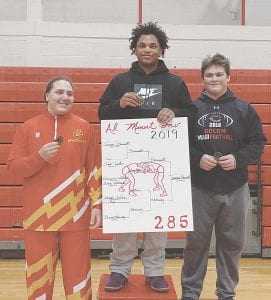 Carman-Ainsworth’s Trevon Bennett takes a picture atop the podium after finishing first overall at 285 during Saturday’s Beecher tournament. Photo Provided

At 285 lbs., Trevon Bennett secured first overall in his respective weight, starting his day with a win over Beecher by fall at 1:49 in the second round before defeating Colon by fall at 5:30 in the championship. At 171, Nathan Taylor defeated his Beecher opponent by fall at 1:27 and eventually went on to secure first. At 119, Omar Al Hallak also took first overall in his division. Anthony Compare at 215 won by fall over Beecher at 1:20 and eventually finished third and Jacob Durbin finished second overall in 152.

David Mathis at 189 lost to Colon by fall and Alex Holmes at 285 lost by fall to Beecher. Full results for the event were not available on www.trackwrestling.com.