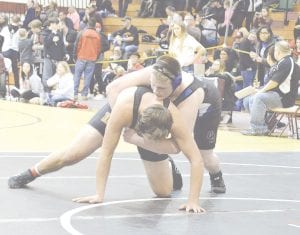 The Cavs’ Nathan Taylor tries to pin a Davison wrestler from behind on Dec. 16.

BAY CITY—The Carman-Ainsworth wrestling team competed in a quad-meet with Lapeer, Midland and host Bay City Western last Wednesday, Dec. 20. The Cavaliers were defeated by Midland 59-24, but no other scores or stats were recorded for Carman- Ainsworth’s other head-to-head matches.

The Cavs wrestle again tonight against Alma, Midland Dow and Montrose in the Holiday Classic Tournament at Montrose High School at 6 p.m.