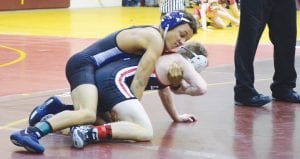 Also placing first for the Cavalier’s included Darian Vaughn at 135 and Demetric Hall at 125, coming in third at 103 was Jacob Yost and finishing fifth were Ronald Roland at 215 and heavyweight Grayden Hamilton. Damina Wilkes grabbed the sixth spot for Carman-Ainsworth at 119.

As of Jan. 13, Hall was also ranked fifth at 112 and Vaughn was eighth in the state at 135. The Cavs are at Lapeer with Flint Southwestern in Saginaw Valley League competition today.