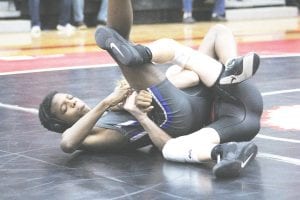 Carman-Ainsworth’s Jabril Muhammad works to get free from a Grand Blanc opponent during a match at Grand Blanc on December 18. Photo by Joe Oster

At 103 lbs., Jabril Muhammad lost his first match to Lapeer by fall. Brijesh Kumar, at 125, lost by fall to Saginaw Heritage in his only match of the day. Larry Brown, at 130, lost by technical fall in the first round to Swartz Creek.

Also competing at 130 was Sonny Morgan, who lost his first-round matchup to Port Huron Northern by fall. At 140, Noah Burn lost by fall to Romeo in the first round. David Mathis, at 189, lost by fall to Midland Dow in his first and only match of the tournament.

Last Wednesday, Carman-Ainsworth competed in the Div. 1 team district tournament at Swartz Creek, losing 78-0 to Swartz Creek in the district title match after having a bye in the semifinal. Swartz Creek defeated Flushing 40-32 in the only semifinal match to advance.