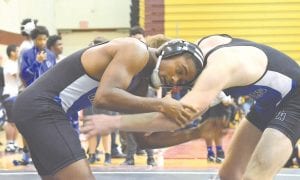 Against Powers, Trevon Bennett at 285 was the only Carman-Ainsworth wrestler to earn a win, pinning Parker Wynn at 3:25. All other Cavaliers won by forfeit.

Carman-Ainsworth hosted Bay City Central and Heritage in a tri-meet on Wednesday night after we went to press.