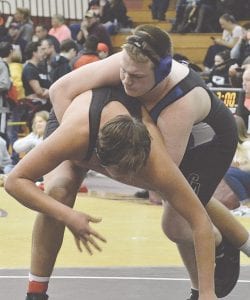 Carman-Ainsworth’s Nathan Taylor, shown here at 171lbs. last season, is one of four returning members to the varsity team this year. Photo by Austin VanDaele

FLINT TWP. – The Carman-Ainsworth wrestling team enters its 2018-19 campaign with a young core of wrestlers that possess very little varsity experience. The Cavs lost eight seniors to graduation and return just four wrestlers from a season ago that have varsity experience, while the remainder of the team is made up of underclassmen and first-year varsity wrestlers.

Sophomores Larry Brown Jr. at 130lbs., Jacob Petty at 152 and Nathan Taylor at 171 and junior Trevon Bennett at 285 round out the returning members of last season’s team that finished third overall in the Saginaw Valley League. All four are looking for strong showings throughout the season while also being looked to for leadership to guide the young core that makes up the team.

“We’re young, but we’re expecting to get better as the year goes on,” noted assistant coach Michael Gross. “The first two meets, we did really well. Better than expected. We lost to heritage by five points and lost to Bay City Western by 11. We’re just looking to improve.”

At 103 lbs., Jabril Muhammad lost both of his matches against Owosso opponents, losing by fall at 1:11 to Joey Devaras and at :53 to Cody Fields, but won by fall over Mt. Pleasant. At 125 Omar Al Hallak lost his match to Owosso by technical fall and lost by fall to Mt. Pleasant.

At 160, Jacob Durbin lost his first match to Owosso’s Colton Blaha by fall at 2:17, but then defeated Owosso’s Justin Schonberg by fall at :53. He then lost to Mt. Pleasant by fall. At 171, Nathan Taylor won both of his matches over Owosso opponents, defeating Erick Foster by fall at 3:24 and Alex West by fall at 2:30.

At 215, Broome defeated Heritage by fall and Bay City Western by major decision. Bennett split his matches at 285, losing by decision to Bay City Western, but winning by fall over Heritage.

Carman-Ainsworth hosted a Saginaw Valley League quad Wednesday after press deadlines and is at Clio Saturday.