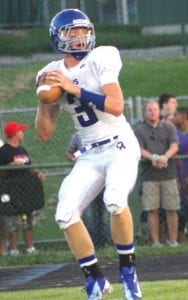 FLINT TWP. — Big plays again played a big part in a Carman- Ainsworth football victory last Friday, as the Cavaliers struck for three longrange touchdowns in a weather-shortened, 37-0 rout of Inkster at home.

Malik Seales ran 60 yards on the first play from scrimmage for one score, Jevontae Alexander caught a 43-yard pass from Connor Storms for another and Demarion Allen returned a punt 65 yards for the final touchdown, as the Cavaliers stayed unbeaten at 3-0.

Only a bolt from above kept the score from really getting out of hand, as lightning ended the contest with 7:42 left in the first half.

The lopsided win closed the nonleague portion of Carman-Ainsworth’s schedule and helped the Cavs earn a No. 4 ranking in the first Div. 1 state poll. They will begin their quest for a Saginaw Valley League South Division title when they visit Flint Northern at 7 p.m. Friday at Atwood Stadium.

Seales opened the scoring just 17 seconds into Friday’s game and then scored again on a four-yard run with 8:02 left in the first quarter for a 14-0 lead. Lorenzo Redmond tacked on a one-yard touchdown run with 5:07 left in the period, and Storms hit Alexander in stride for the 43-yard bomb that made it 28-0 with still 1:44 to go in the first quarter.

Inkster, 0-3, opened the second quarter with a punt attempt from its end zone, but Entrice Mitchell Jr. tackled the punter for a safety and a 30-0 lead. On the ensuing free kick, Allen returned it all the way for a 37-0 command just 16 seconds into the period. The game was stopped four minutes later and officially called at 8:15 p.m.

Seales finished with 69 yards rushing on just four carries and Gerald Holmes ran for 62 yards. Connor Storms passed for 285 yards, kicked five extra points and made a shoestring tackle to stop an Inkster kickoff return. L’Daryl Mosley had one interception and Allen made another off a pass tipped by Jack Baker.