Celebrate 100 years of the DNR with the Recreation Passport 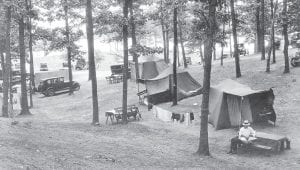 Michiganders have always loved their parks. Initially, the state was dependent on gifts of lands by donors. However, by the 1920s, if expansion was to continue, there was a realization that the state would need a long-term funding source to purchase more land. Financing these lands was not always easy.

In 1957, the state Conservation Commission asked the Michigan Legislature’s permission to set up a park fee system. There were 59 Michigan state parks by then, a majority of which were situated in southeast Michigan.

As automobiles and the interstate highway system connected parks and recreation areas closer than ever before, the state parks system was unable to meet the demand of growing attendance. In 1958, an estimated 17 million people were expected to visit state parks, an increase of more than 8 percent over the previous year. To keep up with demand, the state’s parks system needed more funding. This was how the state park vehicle permit “sticker” was born.

When the stickers were first proposed, there was unanimous agreement that the parks system needed more revenue. In fact, the Conservation Commission based its recommendation on a survey of 4,700 park users, which showed that only one in 12 opposed charging a fee for using parks.

These “sticker” passes would allow unlimited access to state parks. Charged at $2 a year, the stickers were to be valid for a vehicle instead of the previously charged individual entry fees. The annual motor vehicle permits were windshield stickers. For park visitors who only wanted to visit one park a year, the charge could be up to 50 cents. Funds from the stickers were intended to help finance improvements to the parks system, as well as add more parks. Two of Michigan’s neighbors – Minnesota and Ontario – pioneered similar sticker plans, which were the inspiration for Michigan’s vehicle permits.

The road to the sticker, however, was an uphill one. In 1957, the Legislature unanimously passed the “sticker” bill, despite opposition from urban Democrats. The legislation was vetoed by Gov. G. Mennen Williams because he thought funds from the sticker would transfer the cost of park improvement to users.

In 1959, a second sticker bill was passed by the Legislature and vetoed again by Gov. Williams, justified along similar lines as before. In 1960, the Legislature passed yet another version of the bill, which was not vetoed. By 1968, the annual vehicle permits had become an important source of revenue supporting Michigan state parks.

By 2010, it cost $24 to get an annual vehicle sticker. At the time, the parks system faced a massive infrastructure deficit. To ensure Michiganders could continue using their parks, the Michigan Department of Natural Resources devised the Recreation Passport, which was tied to the vehicle registration process and functioned as a vehicle permit. Priced at just $10 and providing year-round access to all state parks, the Recreation Passport was a success, generating more than $7 million in its first year. Today, the $11 Recreation Passport helps fund maintenance and improvements at Michigan’s 103 state parks.