Jerry Nelson to perform at Central Church of the Nazarene 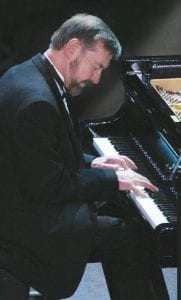 Internationally celebrated concert pianist Jerry Nelson will be in appearing in concert 6:30 p.m. Oct. 21 in the Chenoweth Family Center of Central Church of the Nazarene, 1261 W. Bristol Rd.

Nelson’s concert includes music from traditional to contemporary hymn arrangements, touches of jazz, moments of classical interwoven with hymns, inspirational, eclectic, ethnic and occasionally a dash of country and gospel, just enough variety to keep the audience guessing. All of his concerts feature video that adds an exciting dimension, putting the viewer beside the keyboard — at times in the middle of the orchestra — and blended with captivating videography from around the world.

Nelson has established himself as one of the world’s premiere performers, having performed on all continents. He has teamed up with Dino, Anthony Burger and Nielson & Young and accompanied such artists as Glen Campbell, Sandi Patty, Tom Netherton and Steve Amerson.

As a composer, arranger, conductor and studio producer, he has conducted orchestras from London and Tel Aviv to Nashville and Los Angeles. His creative touch appears on over 500 recorded projects working with his sons, Scott and Brad. His publishing and arranging efforts include several dozen original songs and over 5,000 arrangements.

With piano lessons at age seven, Nelson took on his first church pianist assignment at age 11. With a bachelor’s of arts degree from Northwest Nazarene University and a Ph.D. from the University of Minnesota, he spent a decade in public school music in Minnesota before dedicating more than 30 years as Artistin Residence at First Church of the Nazarene in Denver, Colo.

But today, Nelson and wife, Rachel, are focused on a fulltime concert career. Much of the proceeds of their efforts enable occasional trips to the Congo and Zimbabwe where he performs concerts and his wife works with AIDS victims and training youth peer groups. They also work with humanitarian programs that include economical water purification and advanced education for young people. Retirement, Nelson says, is not yet on the radar screen.

The community is invited to hear Nelson. There is no charge for admission but a love offering will be taken for his ministry. For more information regarding his appearance, contact the church at 810-235-5671, e-mail office@centralnazarene.com
or visit