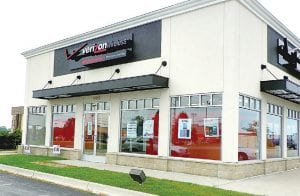 The Cellular Connection, 4415 Corunna Rd., in Flint Township is located in the building that once housed Krispy Kreme donuts.

FLINT TWP. — A blinking neon “open” sign in the front window has replaced the flashing hot sign that for six years alerted passersby that donuts were fresh out of the oven at the Krispy Kreme store, 4415 Corunna Rd.

After being vacant since 2009, the totally repurposed building is now the home of The Cellular Connection and the hot items there now are the latest in wireless phones, accessories and satellite TV service.

Open since mid-April, the store is the first and only TCC location in Genesee County and the largest in the six-store Detroit region which includes Lincoln Park, Taylor, Southfield, Livonia and Clinton Township, said Ann Gutzke, store manager.

TCC is the largest Verizon Wireless premium retailer in the Midwest. Though independent, it is not much different than a Verizon corporate store except that it cannot bill the cost of new phones to a customer’s Verizon account, Gutzke said. But TCC sells the same products.

Tablets and notebooks are popular items and the store now offers 4G service which is not available yet countywide, she said.

TCC seeks to distinguish itself by stressing personalized customer service, short wait times and routine aftercare. It offers price matches, live demos of all models and product protection plans that provide a new phone replacement instead of a refurbished one.

“ We want to make sure we fit you correct- ly with a phone,’’ Gutzke said. “ We will sit with you an hour if that’s what it takes. We like to build good solid relationships with our customers.”

Customer satisfaction checks are made two days, two weeks and two months after a purchase, Gutzke said. All service issues are handled instore.

Gutze said her regional manager chose the Corunna Road site because of its proximity to other large retailers that drive a lot of customer traffic.

Newly redecorated in red, gray, white and black hues, except for outer walls, doors and windows, nothing remains of Krispy Kreme’s tenancy. Even the drive-through service windows were removed though the driveway remains. Counters and walls were moved, the ceiling and light fixtures were replaced and the floor redone, Gutzke said.

At 4,000 square feet, the store is twice the size of others in the Detroit region. Gutzke is one of four employees.

As part of a grand opening celebration in June, the store made a $500 donation to Leader Dogs for the Blind, Gutzke said.