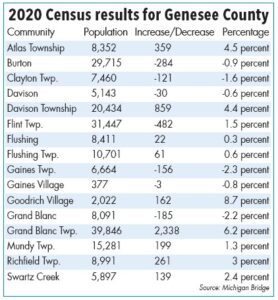 Meanwhile, in Flint, the city saw a loss in population of 20.7 percent, falling to 81,252. Other major Michigan cities saw increases in population such as Grand Rapids with a 5.8 percent increase to 198,917, and Warren, Sterling Heights, Ann Arbor and Dearborn grew nearly 4 percent or more, according to Bridge Michigan.

At the same time, communities such as Burton, Clayton Township, Davison, Flint Township, Gaines Township and Grand Blanc saw decreases in population, some as high as -2.2 percent (Gaines Township).

In Burton, where the administration and city council worked hard to get the word out to the community to get everyone counted, the results came with some disappointment.

Burton Mayor Duane Haskins said the city missed the mark, but it was only after a great effort by community leaders.

“There’s good and bad with that,” said Haskins. “There will be no additional funding, but we will stay where we’re at.”

In Davison Township, where there was a 4.4 percent increase in population over the past 10 years (up 859 to 20,434), Supervisor Jim Slezak said he was pleased with the results and attributed it to the growth the community has seen in those years.

“It certainly helped out with our tax base,” he said of the increase in population. “Housing and business wise over the past few years growth has and will continue. I see that number going up a little more over the next few years.”

Additionally, he said Davison schools and their growth and improvement over the past 10 years has added to that increase in population as it bills itself as a “destination school district.”

“Schools play a part,” said Slezak. “When you have a good school district in your community it’s going to bring in people.”

In Richfield Township, where there was a 3 percent increase in population between the 2010 and 2020 Censuses (total population in 2020 of 8,991), Supervisor Joe Madore said he attributes that increase, in part, to new housing.

“Of course, I am happy to have the increase, and not surprised at all,” he said. “I really hope it is due to some young families moving into our area. Part of the increase I’m sure, is due to some additional housing being completed in vacant lots in a couple of our subdivisions. We’ve had a few new homes on lots not in subdivisions as well.”

Madore added any new homes add to the township’s taxable value and helps to fund police and fire operations.

He said he expects this trend to continue in the next decade as well.

“We are a quiet rural area and have amenities like the County Parks which has a disc golf course, beautiful historic Pavilions, a campground and beach at Holloway Reservoir and the Iron Belle Trail just to name a few, but yet still close to town and I-69,” said Madore. “Best of both worlds, in my opinion.”

Some communities, such as the City of Flushing, saw very slight increases in population following the 2020 Census. Although Flushing only gained 22 residents—a 0.3 percent increase—in the last 10 years, Flushing Mayor Joseph Karlichek said that he’s pleased to see that the city has not incurred any losses in population.

“While the small increase in population does not indicate growth, it does reflect stability and residents’ satisfaction with the community and its municipal services,” he said. “A large increase in population was not expected since the City’s neighborhoods are complete and there is little land left for residential development.”

Karlichek said city administration and the city council will continue to strategize on ways to keep the city attractive to new families and commerce, while partnering with current residents and businesses. The city is also planning to launch a new website that will enable online visitors to learn about Flushing’s attributes and benefits.

“Communities deteriorate and residents and businesses leave when City services fail to provide safety, security and confidence,” he said. “The City of Flushing’s continuing commitment to public service has facilitated low crime, clean streets, effective problem solving and core values that prioritize the importance of responsive and transparent government.”

“The biggest advantage (to the 2020 Census numbers) is that we won’t lose any of our federal funding,” said Flushing Township Supervisor Fred Thorsby. “We’ll stay at the same level that we’ve been getting.”

Thorsby said that effective policing, outdoor recreational opportunities and the popularity of the Flushing Community Schools system have likely been the biggest contributors to the township retaining its population and attracting some new homebuyers and property buyers over the years.

“We didn’t see a huge increase, but we have had some new families coming and some new houses being built in the township,” he said. “Overall, Flushing Township is a good place to live from a safety and school system aspect. We have a fairly low crime rate and have placed consistently in the Top 10 of Michigan’s Safest Cities.”

Starting in 2020, Flint Township launched the Discover Flint Township marketing campaign to draw new businesses and residents to the area. The township has also attempted to reduce crime and improve public safety by hiring more police officers and firefighters in 2020 and 2021.

In the City of Swartz Creek, a 2.4 percent increase in population isn’t terribly remarkable, but it does put the city in a good position for additional funding.

“It’s certainly a good place to be, relatively speaking,” said City Manager Adam Zettel. “Swartz Creek is a small community, but it’s maintaining its desirability, and that’s reflected in the growth and new construction.

“That does improve our position slightly in terms of revenue sharing. State and federal funds are often distributed, at least in part, by population. In the last round of (American Rescue Plan Act) funds, our allocation was roughly $100 per person.”

Clayton Township Supervisor Tom Spillane said the census numbers for his community do not reflect what township officials know to be true: that new homes are being built and more people are finding the area suitable for their families. The apparent loss of 121 residents likely is more reflective of a community in transition.

“We’ve had several new houses built in the township already this year, a couple are going on as we speak,” Spillane said. “I don’t think (the 1.6 percent drop) is going to be a real hurt anywhere. We always have people moving in and out because of jobs and things like that. I think a lot has to do with people moving, relocating, people are retiring and moving out of the area. That’s our biggest thing. People are growing older and downsizing or moving out to be closer to their kids.

Spillane said he’s not worried, and he believes the numbers will change for the better in a couple of years.

“We’ve noticed building is on the increase and that’s a good sign,” he said.

Paul Fortino, supervisor in Gaines Township, was surprised to find that his community apparently lost 156 residents, or 2.3 percent of the population.

“We don’t have a huge number of empty housing stock that I know of,” Fortino said. “I don’t know what to say, to be honest. The township has had some new housing in recent years, probably averaging one or two houses a month, at least one.

“It will have some effect on budget (because) just about everything has a component of population in it. I don’t know how much it will affect it. The township depends on those contributing funds; we would have great difficulty if those were reduced by much.

“We’ll probably have to look at it and see if we agree with it, that will be the biggest thing. It’s possible to question it, that’s for sure. I don’t know if they missed anybody or what. I’m a little puzzled.”

It’s possible that some residents simply did not respond to the census, but Fortino said no one expressed that opinion to him.

In the City of Grand Blanc, where the numbers dropped by 185, City Manager Wendy Jean-Buhrer said she wasn’t surprised that the overall data was lower.

“It was somewhat expected,” Jean-Buhrer said.

City officials have been tracking American Community Survey data, which predicted that Grand Blanc would have about 7,900 residents in 2020. So, when the census came back at 8,091, city officials were pleased.

“I did delve into some of the numbers, and the trends were interesting,” she said. “In 2010, we had a lot of younger children, more little kids. I think that is sort of indicative of our society now, of people having fewer children. And, we also have fewer senior citizens.”

“We hope there won’t be any big impact,” she said. “We hope it’s a matter of just not receiving that increase that we would have if we’d stayed equal in population.”

Atlas Township Supervisor Shirley Kautman-Jones said she’s not surprised that the population increased in her community.

The increase of 359 residents, or 4.5 percent, is good news, but the township could survive even if the numbers had dropped.

“When the federal government, the state and the county look at any type of funding or grants, they always look at population,” she said. “State shared revenue is wonderful. But we’ve always been … conservative with how we spend our money.”

Mundy Township was another community that saw some growth over the 10-year census cycle. With 15,281 residents, the community has grown by 1.3 percent, or 199 residents.

“I think it’s exciting in current circumstances when look at some of our peer communities that are losing population or holding steady,” said township Manager Chad Young.

“We’ve seen an increase in housing starts recently; it’s unfortunate that it’s right at the conclusion of a 10-year census cycle. But there is a lot of building going on now and I think we will see a lot more of that in the near future.”

“We’re pretty balanced and we’re happy with that,” Young said.

The greater numbers mean the township will get a little more in revenue sharing, but “more importantly, we won’t lose,” he said.

“Consistency and predictability are positives in terms of planning and budgeting. It allows us to look at where the immediate and intermediate future may go.”