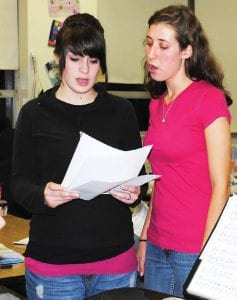 The production, which is a dinner theatre, is a take-off on the old radio shows said Katie Thompson, director and founder of Swartz Creek Center Stage.

“There are skits, singing, dancing, a five-minute murder mystery, an Abbott and Costello routine and a Burns and Allen routine,” she said. “There also are songs from the 1930s and 1940s.”

The five-minute murder mystery is titled “The Murder of Mrs. Brooks” and includes four cast members, along with retro sound effects and commercials that bring back nostalgic memories for audience goers. Some of the songs to be performed at the dinner theatre include “On The Atchison, Topeka And The Santa Fe” and “Diamonds are a Girl’s Best Friend.”

Tickets for the “Musical Radio Show” are $15 per person, which includes dinner provided by Elegant Catering. A maximum of 110 people can attend each performance, and all tickets must be purchased in advance by Friday, Nov. 19.