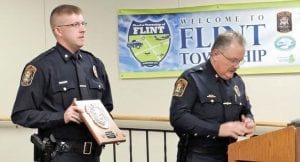 Flint Township Officer Michael Schuyler, who was shot during an incident a year ago, was one of 13 law enforcement officers recognized last week for outstanding professional conduct at the shooting scene.

Each was cited for the roles they played during an incident on January 23, 2015 in which Flint Township Officer Michael Schuyler was shot during an altercation with a suspect at the Hometown Inn on Miller Road.

For his bravery, Schuyler received the Medal of Valor, Police Heart and International Association of Chiefs of Police (IACP)/DuPont Kevlar Survivor’s Club Award.

The Medal of Valor is the highest award issued by the township police department, Chief Sippert said, adding that Officer Schuyler has recieved numerous awards during the last year as a result of the shooting. The latest from the IACP is presented to officers who survive a life threatening incident because of wearing personal body armor.

A Medal of Distinguished Service was presented to Flint Twp. Officers Rob Cavett and Neal Donovan for their work in aiding Officer Schuyler and arresting the suspect.

A Citation for Professional Excellence was presented to Flint Twp. Officer Chris Weber and Flint Twp. Sergeant Frank Hartner for their leadership at the scene.

Swartz Creek Officers Nicholas Paul and Terry Vankeuren Jr. both were presented a Citation for Professional Excellence for other Law Enforcement Agency.

Chief Sippert said the department’s award policy has been in place many years and only has one award for other police departments,

“We truly admire the work (Swartz Creek Officer Nick Paul) did that evening and if we could give him a higher award we would,” Chief Sippert said. “He showed up for battle.”

Officer Paul has helped out on numerous other occasions, he said, adding praise for Officer VanKeuren who also responded to the call for backup and “put himself in extreme danger.”

Chief Sippert noted that the officers have received honors from their own departments and other law enforcement agencies for their work at the shooting scene.