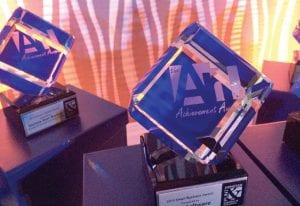 Winners in 12 business and hospitality industry categories took home this trophy from the 2014 Art of Achievement Awards.

GENESEE COUNTY — Two Flint Township businesses were among the winners at the 2014 Art of Achievement Awards, on Nov. 6, presented by the Flint & Genesee Chamber of Commerce, according to press release.

Nearly 400 people were on hand as U.S. Congressman Dan Kildee presented awards to these outstanding businesses and hospitality industry stars at the Riverfront Banquet Center in downtown Flint. During the event, honors were presented posthumously to Claire White, who received the Woman of Achievement Award and Bill Everett, who was recognized as the 2014 Community Champion.

White was the inaugural recipient of the Woman of Achievement Award. Her son Ridgway White accepted the honor. She was recognized for her commitment to philanthropy and community engagement in Flint & Genesee. As the daughter of Harding Mott and granddaughter of Charles Stewart Mott, Claire White’s life and legacy was focused on service. To honor her, the Woman of Achievement Award was renamed. Future recipients will receive the Claire White Award.

Everett was recognized with the 2014 Community Champion Award. Twenty-nine years ago he founded the Vehicle City International Old Timers Hockey Tournament. He was able to bring hundreds of hockey enthusiasts to the region each year and expose hundreds of young people to the sport, while at the same time creating a legacy tournament that continues to have an economic impact on the region. His wife of 60 years, Theo Everett accepted the award. — Rhonda Sanders