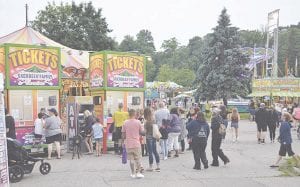 FLUSHING —The 2020 Flushing Summer Festival has become the latest local event to be impacted by the COVID-19 pandemic.

On May 1, the Flushing Area Chamber of Commerce Board of Directors announced that the Summer Festival has been postponed until further notice. The annual celebration, also known as Summerfest, was originally scheduled to take place in the City of Flushing from June 10-14.

“The Summerfest committee has been working very hard over the last 10 months planning for this year’s Summerfest and we are heartbroken that the festival will not take place at the normal scheduled time,” festival organizers said in a joint statement. “This decision was not taken lightly (as) we understand the financial and social impact the festival brings to the Flushing community.”

While the number of coronavirus cases has begun to flatten in Genesee County, Summerfest committee members said that holding the festival as planned would not be feasible or safe from a community health standpoint.

“At this time, it is of the utmost importance that we take care of our community and act responsibly so as to focus on overcoming this pandemic as soon as possible,” festival organizers said. “As much as we would like to continue planning for the event to take place in June, the health and safety of our patrons, volunteers and vendors is of utmost importance to us.”

Although Summerfest will not be held in June, organizers are hoping to host the event later this summer. Summerfest committee members said that they will update the community when a decision has been made.

In 2019, Summerfest drew over 10,000 people to Flushing through a five-day period. The festival featured a Motown-themed parade and new activities, such as additional kid’s events and a free concert night.