Carman-Ainsworth students encouraged to move beyond comfort zone and ... 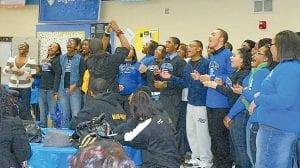 FLINT TWP. — Isaiah Oliver’s message began with an analogy about a man’s dog moaning in pain because it was sitting on a nail. Asked why the animal would not move, the man said because it was not uncomfortable enough yet with the pain.

People often find themselves in uncomfortable situations analogous to sitting on a nail but don’t move because it’s a familiar discomfort, said Oliver, who was the guest speaker last week at the annual Black History Month Luncheon, sponsored by Carman-Ainsworth High School’s African-American Students Association (AASA).

Oliver, 30, is a program assistant at Mott Community College who was elected to the Flint Board of Education last year and also serves as chair of the Flint Human Relations Commission and on several area community boards.

Oliver said he debated whether to talk to the students about his board member experiences, his college experiences or his life growing up on Flint’s north side in a single-parent household. Instead he chose “freedom’’ as a topic because he wanted to motivate students to accept the responsibility that comes with it. 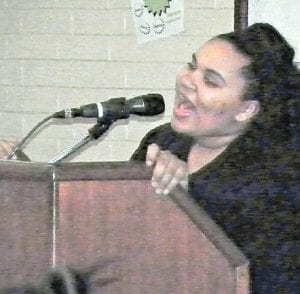 A student sings “Lift Every Voice and Sing” during the annual Black History Month luncheon, sponsored by AASA at Carman- Ainsworth High School.

“It comes a point in your life when you need to take all that has been given to you and do something with it,” Oliver said.

Freedom also can be painful because it sometimes leads to failure which is viewed negatively but failure forces people to be creative which can lead to new opportunities and experiences that could help solve the world’s problems, he said.

“Many of us deny that problems we face are caused by us or that we have what it takes to be solutions to those problems.,” he said. “We want someone else to do it, … to take responsibility for us, … to make decisions for us. We don’t want to do the work required to get up off the nail.

“I am going to tell you today that you are the answer that you’re looking for. You are that Superman that we are all waiting for.”

Oliver cited several societal problems including the high unemployment rate among black males and that black youth in Flint are dying every day.

“It is really important for you to understand the challenges you are facing and that you all really are our hope,’’ he said.

“We send you away today with a charge to change the world.”

Do that, he told the students, by embracing freedom, ceasing to ask people to think for you, accepting the responsibility of questioning everything, being better than the generation before you, thinking bigger, opening your mind and more than anything “getting up off that nail.”

The program also included student performances and a” Who Am I?” black history quiz with prizes. It also was attended by school administrators and invited guests from Mt. Morris and Flint Southwestern Academy.

AASA’s luncheon was followed on Friday night by a free Gospel Extravaganza concert featuring choirs from around the county.