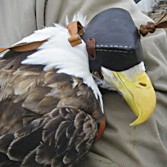 The injured bald eagle was hooded to keep it calm and to prevent further injury.

GAINES TWP. — Prefering habitats near lakes, oceans, rivers, seacoasts and other large bodies of open water with an abundance of fish, the bald eagle has served as our national bird since it was pictured grasping 13 arrows and a 13-leaf olive branch with its talons in the Great Seal of the United States on June 20, 1782.

Recently that image was done a great disservice when one of these national treasures was found injured on the Gaines Township/Argentine Township line near Ray and Van Vleet Roads in southwest Genesee County on Feb. 17. The animal was actually first spotted 72-96 hours earlier, but it took several days to capture.

When those injuries later proved to be from a gun shot wound, calls went out across the state for information leading to whoever perpetrated this atrocity. While it may have seemed like a shot in the dark, it turns out authorities were able to answer that question, leading Genesee County Prosecutor David Leyton to charge 65- year old Gaines Township resident James Allen Nelson with reckless discharge of a firearm and shooting an endangered species. Both of the charges are misdemeanors and each carry a sentence of up to 90 days in jail.

“The injured eagle was rescued thanks to a call from a concerned citizen,” said DNRE Law Enforcement Chief Gary Hagler. “We want to thank the team that helped us rescue this majestic bird. We hope that it can be rehabilitated and returned to the wild.”

According to www.michigan.gov, “Bald eagles first received federal and state protection in Michigan in 1940 and 1954, respectively. They continue to be protected by the Federal Migratory Bird Treaty Act, the Federal Bald and Golden Eagle Protection Act, and the Michigan Endangered Species Protection law. Under these laws, a person may not kill, harass, disturb, or otherwise harm bald eagles.”

On March 17 the Flint Township View reported that after locating the eagle and recovering it from the field, DNR officials transported it to the Canton Center Animal Hospital for examination and treatment, according to a press release from Leyton’s office. The medical examination determined the eagle had suffered gunshot wounds, and it was treated for its injuries. The eagle was then taken to a licensed wildlife rehabilitation center for further treatment and rehabilitation. A law enforcement investigation by the DNR led them to Nelson and based on the DNR’s report and evidence, Leyton authorized the two misdemeanor counts against him. Nelson will be arraigned on the charges in the 67th District Court.