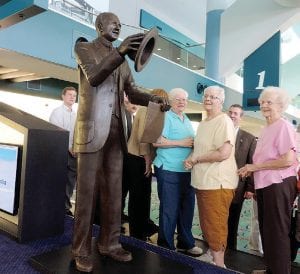 Descendants of Charles W. Nash look over the newly unveiled statue of their famous ancestor at a bronzed statue installation at Bishop Airport. The unveiling of the Charles W. Nash bronze statue at Bishop Airport also provided an opportunity to see up close up a 1929 Nash Advanced Coupe from Waterford and a 1948 four-door Ambassador for Orchard Lake, drove in by members of the Erie Shores Nash Club.

FLINT TWP. — With a 1929 and 1948 collector Nash car displayed outside and several descendants of automotive pioneer Charles W. Nash family attending, the Back to the Bricks Committee unveiled its fifth life-sized bronzed statue at Bishop International Airport on Tuesday.

Like Chrysler, Nash’ statue is flanked by a 46-inch scrolling monitor detailing the significance of his contribution to Flint’s automotive history.

One story told about Nash was that he worked 16 hours days for nine years without taking a day off, according to Jeremy Dimick, Sloan Museum curator of collections, 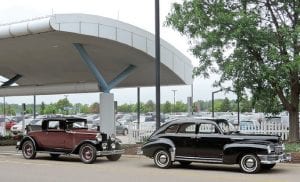 “He was the kind of guy who worked hard and expected his employees to work hard,” Dimick said.

Dimick also spoke of the connections between Chrysler and Nash. They did not like each other at first but bonded when they discovered they smoked the same brand of cigar, he said.

After a falling out with Billy Durant over GM leadership, Nash resigned in 1916. A month later he purchased the Thomas B. Jeffery Company of Kenosha, Wisconsin and renamed it Nash Motors. A decade later Nash Motors was producing 130,000 medium priced, moderate-sized cars annually.

When Nash retired in 1937, Nash Motors merged with Kelvinator Appliance, which became part of American Motors in 1957 and was purchased by the Chrysler Corporation in 1987, according to a scrolling narrative accompanying Nash’s statue.

Born January 28, 1864, Nash died June 6, 1948. He was married to Jessie Halleck whose descendants still reside on the family farm in Burton.

Sculptor Joseph Rundell who recently moved his studio from Clio to a historic home in Flint, said he is currently working on a statue of Albert Champion, founder of AC Spark Plug.

The Back to the Bricks Committee next plans to install a statue of Otto P. Graff at noon on August 16, during the BTB event.

“We have about six more that we want to put up to honor our past,” said Al Hatch, BTB founder and chairman of the Statue Committee, the charitable arm of the annual car show that drew some 50,000 cars and 500,000 people to the ninth annual event last year.

Graff will join other statues in a downtown Flint of Louis Chevrolet, David Buick and Billy Durant.