Chef to the Stars

C-A grad returns to give culinary talk at MCC 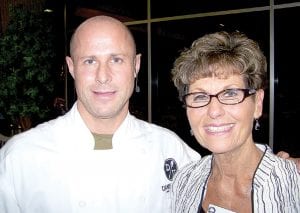 FLINT — A New York City chef who has cooked for Oprah, Donald Trump and a who’s who list of celebrities, was himself the star of the show at a dinner fundraiser Friday night at Mott Community College’s Applewood Cafe.

Daniel Vater, a graduate of Carman- Ainsworth High School, returned to Flint to showcase his culinary skills at a benefit for MCC’s Women in Education program. The fundraiser was the brainchild of Vater’s mother, Rita Vater-Darnton of Flint Township, who co-chaired the event and is a Culinary Team Host.

“I am a part of this organization because I believe in the organization,” said Vater-Darnton, a retired educator. “We do so much good. You have no idea. So many women need (help).’’

The WEC program began ten years ago with the mission to assist MCC’s large population of female students, many of them single mothers, with problems that impede their college studies. Funding is not used for tuition or books but special unmet needs such as professional clothing, bus passes and sometimes emergency medical care. 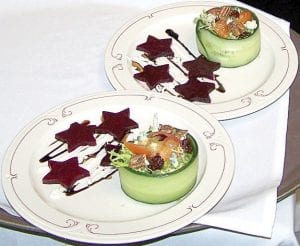 Centerpieces of orchids encased in ice sculptures set the scene for the black-tie affair where guests not only ate but were given a hands-on demonstration of how the “New York style’’ meal was prepared.

Also working under the direction of Vater and his sous chefs flown in from NYC, MCC culinary students helped to prepare and serve the three-course meal. Vater also spent several days prior to the event coaching students.

Julius Gray, a double major in food service management and culinary arts, said he learned to focus his career goals on whether he wants to work at a restaurant, own a catering business or do something else in the hospitality industry.

“I want to be big time,’’ said Gray, who expects to graduate at the end of the year and move on to a bachelor’s degree program.

Ariel Seay, one of three students selected to help Vater with the food demonstrations at the event, said she learned how to work under pressure. She will graduate in the spring and plans to further her culinary studies at the Art Institute of Michigan in Novi.

Vater peppered his cooking demonstration with anecdotes about famous people he’s cooked for many of whom he met between 1999 and 2006 when he was executive chef for The Hearst Magazine Corporation in New York.

One of his mother’s favorite story is the time he playfully smacked the hand of news icon Barbara Walters for dipping into his pots. Walters and several members of “The View’’ cast were in his kitchen prior to a big Hearst event, Vater said, recalling the horrified reactions when he smacked Walters’ hand. He explained that he had prepared just enough food to serve guests with no samples to spare.

Vater said the salad served at the MCC dinner, which he calls “Stars and Stripes Forever,’’ was created for former First Lady Laura Bush. It consists of nuts and vegetables on a bed of frisee lettuce garnished with beetshaped stars and plated to resemble an American flag. Bush was so impressed by the colorful dish, she sought Vater out after the meal and posed for a photo with him, he said.

Also on the menu was Chicken Ballotine, a truffles-stuffed chicken creation that Vater said is one of his signature dishes followed by Raspberry Napoleon for dessert.

MCC students also served a variety of hors d’oeuvres and drinks that Vater created. They were served on custom-designed platters he brought with him from New York.

“All my hors d’oeuvres has its own special platter,’’ Vater said, explaining that attention to finite details is part of his success strategy.

“In NYC, I play a very heavy hand in everything that is done for my events,’’ he said. “There have been times I have had to turn down events if it didn’t fit into the way I wanted to be branded.’’

Vater attributes his culinary roots to his mother who was involved in the hospitality and entertainment industry when he was growing up.

“I was always helping my mother in the kitchen,” Vater said. “She is an amazing chef in her own right.”

Vater majored in political science at the University of Michigan before going on to law school in New York City. While working as a waiter in the Big Apple, he took an interest in innovative foods and ideas that kindled his chef ambitions.

That’s when the “amazing opportunity” arose circa 1995 to attend the famed Ritz Escoffier, a cooking school in Paris with the added bonus of having a free place to stay, he said. After finishing an apprenticeship in Paris, he returned to the United States to launch his career.

Vater said one way he fine-tuned his expertise was by revamping recipes in cookbooks written by famous chefs.

“I would change them to make them my own and at the end of the day those cookbooks were my muses for what I did in my life,’’ he said of his atypical career path.

Vater makes it clear that his journey from Flint to national prominence was based more on talent, drive and determination than luck.

“I am a firm believer that with the wherewithal and the desire and drive to accomplish whatever you want in life, nothing will stand in your way,’’ he said, attributing his work ethic to how his mother raised him.

He also credits Delores Digiacamo and Marcia Sauvie – two of his teachers at Carman-Ainsworth — with instilling in him the belief that he could do anything in life he wanted to do.

He planned to pass that message on to MCC students in his lecture about daring to be different and forging their own career paths.

Vater said he only worked in one restaurant after returning from France. Prior to joining Hearst he served as executive chef at the Exchange Club in Wall Street, as catering manager for Pamela Morgan-Flavors and as private chef for the Le Frak family and Jann Wenner, the Publisher of Rolling Stone magazine.

In 1999, he was hired as the executive chef for Good Housekeeping magazine, one of several Hearst publications. The following year, he was promoted to the executive position for the entire Hearst Corporation where he worked for six more years.

During his tenure at Hearst, he was responsible for planning and executing all events for the corporation. He honed his skills working directly with the editors and publishers of Hearst magazines including O, The Oprah Magazine, Cosmopolitan, Redbook, Seventeen, Marie Claire, House Beautiful, Town & Country, Esquire and The Food Network magazine.

He cooked for the Clintons, the Bushes and a long list of a-list celebrities including John Travolta, Sophia Loren, Oprah, Bette Midler and Colin Powell.

“I, too, had a dream. when I started my education in Flint Michigan,’‘ Vater said. “I (did not know) one day I’d be part of something so big.’’

Now owner and executive chef of Daniel Vater Fine Catering in New York City, he has a web site at www.danielvater.com and announced plans to launch a line of gourmet foods this spring. He also hinted that his Flint fan club should look for him in the fall on a new cooking show. His next goal he said is to become the male version of Martha Stewart by building his brand into a household name.

“I have spent my life raising the bar,’’ Vater said of the heights his career has taken him.