CHEROKEE BADGE RETURNS TO JEEP WITH ‘NO COMPROMISE’ 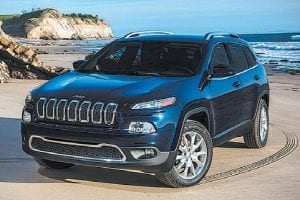 Bringing back the Cherokee badge to the midsize SUV market after a 12-year absence, the new 2014 Jeep Cherokee will arrive at dealer showrooms in the third quarter of 2013 with a base MSRP of $22,995.

That is less than the price of the outgoing Jeep Liberty, which replaced the Cherokee in 2002, yet the new Cherokee, according to Chrysler, buyers will benefit from significantly improved fuel economy, more safety features and the addition of advanced technology.

“We call it the no-compromise Jeep,” said Chrysler spokesperson Kathy Graham. “With some older models, if customers wanted offroad capability, there was a weight penalty and a fuel economy penalty. The nice thing with this one is, they’re still getting best-in-class capability, but it will also have great on-road ride characteristics and competitive fuel economy, so you’re not giving anything up, even if you don’t go off-road with it.”

The $22,995 base model of the Jeep Cherokee Sport comes with fuel economy of up to 31 mpg and a class-exclusive nine-speed transmission.

Graham said, according to research clinics conducted by Chrysler, people expressed a lot of excitement and enthusiasm at the return of the Cherokee name to the Jeep midsize lineup. “And the initial response when people see it in person is their excitement rises,” she said.

The 2014 Jeep Cherokees will be available beginning in the third quarter of the year.