Cherry sworn in as for 49th House District representative 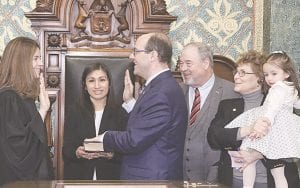 “I am thankful to the people of Genesee County for giving me this opportunity to be their voice in the Capitol,” said Cherry. “It is clear that the residents of our community want to see our aging infrastructure updated, stronger, more vibrant communities and safe drinking water for us all. Most importantly, people are tired of the dysfunction they see in Washington, and don’t want to see it in Lansing. There is a lot of work to be done and I am ready to get started.” — G.G.