Everything old is new again. GM is proving that old saying by releasing the first pictures of the 2016 Chevy Silverado and 2016 GMC Sierra, which will be coming out in the fall.

The redesign of the 2016 Silverado 1500 and Sierra is part of an aggressive strategy to build on the trucks’ momentum, said GM spokesman Tom Wilkinson.

“We introduced the newly designed Silverado and Sierra in late 2012,” Wilkinson said. “The vehicles went on sale in the spring of 2013.

“But we knew that Ford was doing interesting things with the 2016 Chevy Silverado F-150 and that Ram was going to be coming out with new trucks, so we always planned to have a quick refresh schedule.” Even before the refresh, Wilkinson said, Chevy trucks are on a roll, with Chevrolet pickup sales up 32 percent so far this year. Chevrolet intends to strengthen this momentum with significant updates for the 2016 Silverado 1500 full-size pickup. 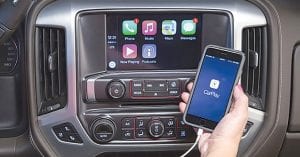 “New front-end designs with bold horizontal elements, sculpted hoods and dramatic lighting reflect the strength and refinement that have helped make Silverado the fastest-growing full- size pickup brand this year.” Other changes for 2016 will include expanded use of 8-speed automatic transmissions, updated Chevy MyLink with support for Android Auto and Apple CarPlay, and additional safety technologies.

Wilkinson emphasized that the Silverado is only being refreshed, and that the work done is not a complete reengineering. 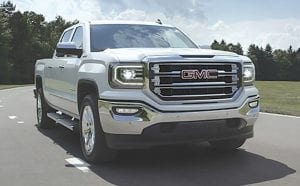 The biggest change to the trucks is the addition of Apple Car Play and Android Auto technologies, said Wilkinson.

“It’s interesting,” Wilkinson said. “Since many truck buyers are older and male, we originally thought that they might not want the newest tech. Well, it turns out that however conservative truck buyers may or may not be in their lives, they are definitely not conservative when it comes to technology.”

Wilkinson said that the Silverado, like the Sierra, has proven popular with the public. Since the introduction of the new Silverado 1500 in the spring of 2013, Silverado sales have grown by double digits, on a percentage basis, each year. Through June of this year, Silverado sales are up 14.6 percent.