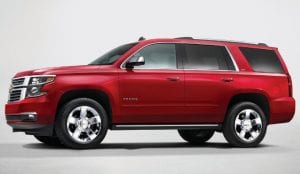 Demand for the new 2015 Chevrolet Tahoe and Suburban are outpacing expectations, according to Chevy officials.

Chevrolet created the SUV segment with the Suburban in 1935 and has been the sales leader in the full-size SUV market ever since, said Chevy spokesperson Leslie Rajewski.

Today, the average turn rate – or how quickly it takes a particular vehicle to sell after it is delivered to the dealer – is 17 days for the Tahoe and 10 days for the Suburban.

Retail sales of the Tahoe and the Suburban in April more than doubled from a year earlier, increasing by 108.4 percent and 109.8 percent over April 2013, respectively. Between the two models, Chevrolet held approximately 50 percent of the full-sized SUV market, said Rajewski. 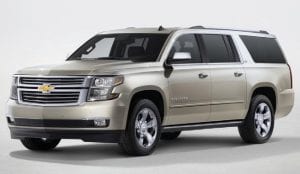 “The Tahoe and Suburban are the leading vehicles in the segment, and some of the best Chevrolet has ever built,” said Brian Sweeney, Chevrolet’s U.S. vice president. “The demand for these refined, functional, and technology-driven models is proof that consumers agree, as well.”

And, said Rajewski, customers are opting for fully-loaded models. In April, 50 percent of all Tahoes sold were the top-of-the-line LTZ model, while 65 percent of all Suburbans were in LTZ trim.

The LTZ models come standard with such state-of-the-art equipment as LED daytime running lamps, and the third generation of magnetic ride control, a real-time damping system that delivers more precise body motion control by “reading” the road every millisecond and changing damping in just five milliseconds.