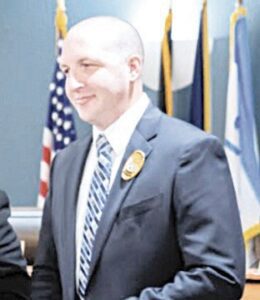 Present at the meeting from the city were Ross, Mayor Duane Haskins and Ofc. Farah Glasstetter.

He said there were 32 residents at the meeting, but he added he hopes there will be more participating in future meetings. It was discussed that flyers be made to pass out to others, which the city is now preparing.

The group discussed having the meetings at different locations throughout the year to accommodate more residents.

Council Vice President Greg Fenner suggested meeting at the three schools, which is an option Ross said he is exploring.

They discussed having captains that will lead the group. The goal of the captain is to streamline communication with the police department. The captains will be responsible for communicating with residents in their district, represent their district during the meetings, and organizing events.

Anyone interested in being a captain is asked to email burtonpolicecares@ burtonmi.gov.

Ross said the group discussed the stats of the department and compared them to stats in 2019, with 2020 stats skewed due to the pandemic.

He said the department doubled or tripled its stats in areas of community policing.

“This is such an important trend to show the direction the police department is going,” said Ross. “The officers are committed to community engagement.”

Anyone interested in joining can email their interest to burtonpolicecares@ burtonmi.gov.