Chief remembered for dedication to community 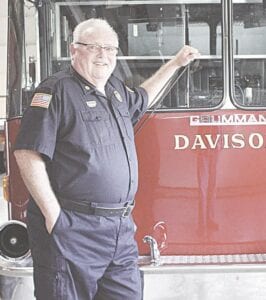 DAVISON — It had always been Mike Wright’s dream to be a fire chief and for the last 18 years of his career, he lived that dream.

Upon his retirement from the Davison-Richfield Area Fire Department in 2018, after 46 years of service, Wright said, “It’s been a great run. I’ve had the chance to work directly with hundreds of people committed to fire fighting. I’ve been blessed.”

Wright died Nov. 26 at the age of 66 at Ascension Genesys Hospital. Cremation has taken place. No services will be held at this time.

Wright retired from Buick in 2003 after 32 years. The son of a Davison firefighter who served 27 years with the department, he admitted in 2018, upon his retirement as chief, he followed in his father Roy Wright’s footsteps.

From the time he was young, Wright said he wanted to be a firefighter. In high school he served as a cadet and became a full-fledged firefighter on Sept. 17, 1972. He became chief in 2000, attaining his dream to one day be fire chief.

Retired Assistant Chief William “Skip” Davis said he worked alongside Wright for years and considered him a friend and a dedicated member of the fire services, in general.

“He served our community for over 46 years,” said Davis. “Many of us grew up with Mike, he was a firefighter, a captain and a chief. He was a mentor to a lot of people and a friend to just about everybody.”

Davis recalled Wright had a gruff exterior, but once you got to know him you realized he was a totally different person. He was someone you could talk to about serious matters and he’d listen and offer advice.

“It was a totally different thing to him,” said Davis. “It was heartfelt, he really cared. All the kids saw that side of him – if they were in a jam, they’d come ask Mike a question and he was very good at offering advice.”

Davis added, “I got to see a different side of him too, how dedicated he was to the fire service. I think he did a great job.”

In 2018, Wright said one of his greatest accomplishments as chief was the construction of Fire Station No. 2 in Richfield Township. It was something the department had needed since the 1970s and that dream was finally realized in 2013.

Fire Chief Brian Flewelling, who took over after Wright’s retirement, said Wright was “certainly a very influential figure for a very long time to the Davison area and the county in general.”

Flewelling said coming along after Wright and filling his shoes within the department was a challenge and he accredited Wright with not only having had a hand in many in the community, but many things all over the county.

“He inspired a generation of fire fighters. His stature and persona were big, and he was a big man in many ways,” said Flewelling. “He was very involved in the fire service and dedicated to the Davison area as a whole.

“He was very influential to many of the firefighters currently serving in the department,” he said.

Davison City Manager Andrea Schroeder said she and husband Eric Schroeder, who also retired from the fire department in 2018 where he served as Battalion Chief, knew Wright well from their service to the department.

“We both knew Mike through the fire department. Eric shared 30 years of service with Mike,” she said. “I met Mike when Eric and I were dating and ended up taking my first full-time job with the Fire Department.”

Schroeder said she and Eric both learned a great deal about the fire service from Wright.

“His life revolved around the Fire Department and he touched many lives over his 46 years of service,” she said.

Andrea also said Wright sat on City Council from Dec. 28, 2010-March 7, 2011 during the period right after the recall election in 2010. He served until new council members could be elected.

“We had many fun and memorable times in and out of the fire service,” she said. “Mike had many notable stories and a great sense of humor…except for when it came to snakes. He will be missed, but never forgotten.”

Lloyd Wright, the chief’s son, said he followed in his father’s footsteps much as Wright followed his own father into firefighting.

“Working alongside of him was anybody’s dream…to work alongside the hero you grew up with,” said Lloyd. “Twenty years of working at fire department, he was there every day.”

Total, Lloyd said his family has 151 years of experience in firefighting over three generations.

“It’s a passion they love but it’s something of a family tradition,” said Llzoyd. “There are still three of us active in firefighting (Lloyd and two cousins in Kalamazoo) so those number of years will continue to grow.”

Lloyd said his father was an “excellent water cannon guy” who had the ability to look at a building and quickly size up what kind of water supply was needed to fight a blaze.

“He had an uncanny ability to listen to the trucks work and tell you what’s going on,” said Lloyd. “If you were running a truck, he could tell by the sound of it what was wrong and give suggestions to make it right.”

At home, Lloyd said his father enjoyed hunting and fishing and took excursions which included hunting in Colorado and fishing from boats in the Great Lakes. He said Wright was also an avid golfer.

Wright spent 17 years on the board of the Food Bank of Eastern Michigan, retiring from that position in the spring of this year.

Lloyd said Wright was also an instrumental founding member Genesee County MABAS (Mutual Aid Box Alarm System) which streamlined the way mutual aid is rendered among fire departments countywide. He said Wright was also proud to get coverage up in Richfield Township with the creation of Fire Station No. 2.

“He was a firm believer that the Davison community is there as one group, not as individual areas,” said Lloyd. “Davison and Richfield is one group, one community that we protect equally.

“He was proud of his community, proud of his family,” he said. “He was not only the senior member of the department, but the eldest member and he referred to us (the firefighters) as the kids. He loved all his firefighters; it was like a big second family. He loved and respected each of them.”

Wright was born in Flint on May 26, 1954, son of the late Roy and Joanne (Kennedy) Wright. He enjoyed boating, hunting, golf, but most of all – spending time with his family.

He is survived by his sons, Lloyd (Dana) and Martin (Tori); step-daughter, Kari McCracken; 8 grandchildren; 2 great-grandchildren; siblings, Terri, Sue, Pat (Tammy), Roy and Jim. He was preceded in death by his parents, Roy and Joanne.

In lieu of flowers, memorial contributions may be made to the Food Bank of Eastern Michigan or your local Fire Department.