Three in a row. First Panera Bread, then Eyeglass World and now a proposed Chipotle Mexican Grill add up to a new-construction trifecta on this leg of Miller Road and joins other recent new builds on Miller Road. Chipotle will be built between Panera and the Eyeglass World, but adjacent to the latter.

FLINT TWP. — It is very early days yet, so it requires some imagination to envision the culinary treat in store when a Chipotle Mexican Grill restaurant opens on Miller Road later this year.

In fact, it is so early that construction has not quite started. Plans for the business passed approval on Feb. 26 at the Flint Township Planning Commission, according to Tracey Tucker, township building and business enhancement director.

It will be built adjacent to the Eyeglass World currently under construction and next door to Panera Bread restaurant on Miller Road, south of Genesee Valley Center shopping mall.

Chipotle will be a 2400 square-foot restaurant constructed on the east side of the Eyeglass World building, with a patio in front, Tucker said. Ample parking surrounds the building.

For those not familiar with Chipotle’s which has several locations in Michigan, it specializes in fresh ingredients. 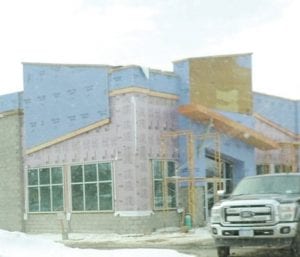 This exterior wall at Eyeglass World, currently under construction on Miller Road, will be shared with a proposed Chipotle Mexican Grill to be built later this year.

Steve Ells, a chef in Denver, Colorado, started Chipotle in 1993 because he wanted to create a gourmet burrito, according to a history on the company web site.

Chipotle especially appeals to fussy foodies because of its commitment to serving “Food with Integrity.” Chipotle pledges to use only the best possible ingredients obtained through resources for naturally raised meats and responsibly grown produce, according to a press release.

If Chipotle isn’t enough to whet your appetite, Tucker said the township has heard tentative talks for the opening of a Potbelly Sandwich shop and an IHOP, the national chain known for its pancakes and breakfasts.