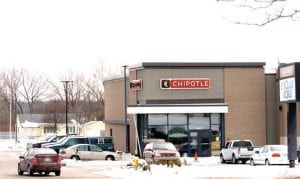 Signs are up on the new Chipotle restaurant.

FLINT TWP. — A firm opening date is not yet set for the new Chipotle Mexican Grill, 4487 Miller Road, but it is slated to open in late March or early April, according to Chris Arnold, communications director for the Colorado-based national chain.

A year has passed since plans were announced to build the restaurant adjacent to Eyeglass World and next door to Panera Bread.

The Flint Township Planning Commission approved building plans for the restaurant on Feb. 26, 2015. At that time, developers said the restaurant would open by the end of the year. Since then, construction has slowly progressed on the 2400 square-foot restaurant, which according to initial building plans will include an outdoor seating area.

Signage for the business was installed a few weeks ago and interior work looks to be nearing completion. Arnold did not provide information about job openings or hiring plans.

According to a statement on Chipotle’s web site: “The fourth quarter of 2015 was the most challenging period in Chipotle’s history, but the Centers for Disease Control and Prevention has now concluded its investigation into the recent E. coli incidents associated with Chipotle,” said Steve Ells, founder, chairman and co-CEO of Chipotle

“We are pleased to have this behind us and can place our full energies to implementing our enhanced food safety plan that will establish Chipotle as an industry leader in food safety. We are extremely focused on executing this program, which designs layers of redundancy and enhanced safety measures to reduce the food safety risk to a level as near to zero as is possible. By adding these programs to an already strong and proven food culture, we strongly believe that we can establish Chipotle as a leader in food safety just as we have become a leader in our quest for the very best ingredients we can find.”

Chipotle held a national employee meeting on February 8 to share information on what may have caused some customers to become ill in 2015 and to inform all employees of the steps that have been taken outside the restaurants to make Chipotle ingredients safer than ever. To allow all employees to attend the meeting, the company closed all of its restaurants that day from noon until about 3 p.m. on that day.

“We have implemented unprecedented food safety standards with our suppliers, which make the food coming into our restaurants safer than ever before,” Ells said in a corporate statement.

The program’s many components include:

*High-resolution DNA-based testing of many ingredients designed to ensure the quality and safety of ingredients before they are shipped to restaurants — a testing program that far exceeds requirements of state and federal regulatory agencies, as well as industry standards.

*Enhanced internal training to ensure that all employees thoroughly understand the company’s high standards for food safety and food handling.

*Paid sick leave helping to ensure that ill employees have no incentive to work while ill.

For those not familiar with Chipotle, which has several locations in Michigan, it specializes in fresh ingredients. Ells, a chef in Denver, Colorado, started Chipotle in 1993 because he wanted to create a gourmet burrito, according to a published history on the company web site.