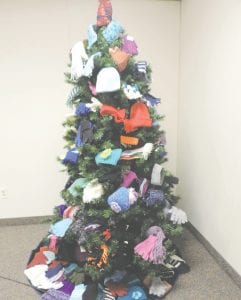 The Christmas Tree at the township hall is decorated with gifts that will be donated to help keep children warm.

FLINT TWP. – ‘Tis the season for Christmas trees, gift giving and good will. Most trees are decorated with sparkly ornaments and lights but each year a special tree is erected at the township hall. Its branches are decked with colorful hats, scarves and gloves that have been lovingly handcrafted or purchased as gifts for children in the Carman-Ainsworth, Swartz Creek and Flushing school districts.

Dubbed The Mitten Tree, it is the work of members of AFSCME Local 1918- Clerical Union, aimed at helping children stay warm in winter when they go outside for recess.

No one is certain how many years the group has produced the tree but Rose Shifflett, township receptionist, has thank-you acknowledgements dating back to 2008.

“ I always make sure people who help us get a photo (from the newspaper),” she said, adding that the tree is a collaborative effort by everyone at the township administrative office. About six people knit and crochet all year to produce the “ornaments.”

For the past four years or so, a large gallon jar dubbed Penelope the Pig has been passed around township offices each month to collect money that is used to buy hats and mittens for the tree.

“We used to decorate the tree with lights and bulbs, I don’t recall how it turned into mittens, ”Shifflett said.

Last year, the tree held 52 scarves, 61 hats and 98 sets of gloves that were divided equally among the three school districts. There’s no final count yet for 2017 but Shifflett estimates it will be equal to or surpass last year’s collection All will be boxed and delivered to school administrative offices around December 19 but donations still are being accepted until December 18.

They also are devoted. One helper has knitted hats for the tree since its inception. She was asked to switch to scarves when the hat supply got large. Some of the ladies are getting carpal tunnel and one broke her arm but all are still hanging in there.

“Everybody pitches in because it is for the children to keep them warm,” Shifflett said.

Some are quite creative. This year, there are a couple of knitted hats with points and bells on them like a jester’s hat. Some have flowers on them. Others, like the one crowning the top of the tree, are multicolored and artful.

Last year the group started a new tradition of collecting for and donating extra money to the Food Bank of Eastern Michigan and Toys for Tots. This year, collection boxes in the lobby are filling up with toys and food. However, the food items will be donated to the pantry at the Carman-Ainsworth Senior Citizens Center, to help feed needy seniors for the holidays, Shifflett said.