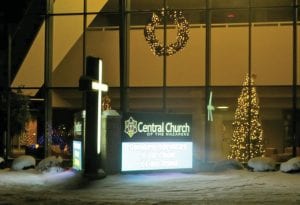 Every year, many churches like this one on Bristol Road, decorate for the holidays with trees, manger scenes and other traditional holiday ornamentation but it only happens once every 5-11 years that churches face the question of holding services when Christmas Day falls on a Sunday. Most recently it happened in 2011 and 2005 but will not occur again until 2022. It happened 14 times in the 1900s and four times so far since the year 2000. So, between gorging on Figgy Pudding and opening gifts, many of the faithful flock also will be attending regular church services Sunday morning. According to a survey by Nashville-based LifeWay Research. 89 percent of pastors questioned said their church will hold Christmas Day services. Lutheran (94 percent), Church of Christ (93 percent), Baptist (91 percent), Presbyterian/Reformed (91 percent), and Holiness (92 percent) churches are most likely to hold services, but Pentecostals (79 percent) are less likely, according to the survey. Pastors in the Midwest (92 percent) and South (89 percent) are more likely to hold Christmas Day services while pastors in the West (83 percent) are less likely. Many churches also hold Christmas Eve services.