Christmas traditions around the globe 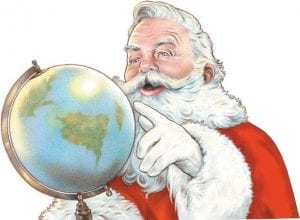 Families across the globe cherish their Christmas traditions. Customs may be unique to every family, but many countries boast their own unique traditions as well.

• Australia: Many Australians celebrate Christmas by coming together at night to sing carols outside. That’s not as chilly as it might sound, as Christmas in Australia actually falls during summer vacation. In fact, many of the country’s most popular Christmas traditions occur outside.

• England: Contrary to Australia, England’s weather around Christmastime is much colder. Many of England’s traditions resemble those popular in North America, including wrapping gifts, hanging stockings over the fireplace and gathering around the Christmas tree. Kids inEngland write a letter with their wishes to Father Christmas, but unlike mailing those letters like many North American children do, English children toss their letters into a fire so their Christmas wishes can go up the chimney.

• France: Christmas celebrations in France begin several weeks before December 25, but Christmas Eve is most special to many natives of France. On Christmas Eve, church bells ring as people sing noels, or carols. The following day, a feast is enjoyed upon returning home from church.

• Germany: In Germany, the weather is cold during the Christmas season, and in the weeks leading up to

Germany and are purchased four Sundays before

Christmas begins. The wreaths have places for four candles, and families light a candle on the wreath each

• Mexico: Families in Mexico celebrate Christmas by decorating their homes with lilies or evergreens. Because the weather is warm, many families also cut designs into brown paper bags before inserting a candle and then setting the designs, called farolitos, along the sidewalk, on windowsills, on rooftops, and along outdoor walls. Many communities in the southwestern United States have adopted this tradition, which they often refer to as luminaria.

• Sweden: Christmas celebrations in Sweden begin on December 13, the day the country celebrates St. Lucia’s Day. Celebrations for St. Lucia, the patron saint of light, are intricate and involve the whole family. A couple of days before Christmas is when many families select their Christmas tree.