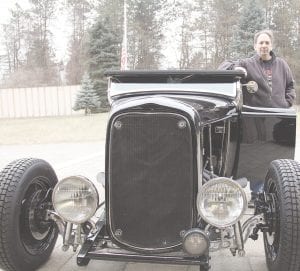 Tom Fahoome of Dryden has been collecting unique and exceptional automobiles for decades, including this 1932 Ford Highboy Roadster, which he will drive to this year’s Chrome & Ice indoor car show. The event will be held at the Dort Federal Credit Union Event Center February 8, 9 and 10. Photo by Alex Petrie

BURTON — The hopeless ones talk about their condition like an incurable illness. They say they “caught the bug” when they were young, or “got bitten by it” later on in life. For Tom Fahoome, it started with Corvettes. Self-admittedly, he was already pretty far gone, but his condition worsened, solidified when he saw a 1962 Corvette and knew it was true love, that he had to have it.

Now, decades later, he has six vintage Corvettes and approximately six more truly impressive vintage and collectible cars of varying makes and models. Fahoome and his wife, Peppy, have made it a hobby to visit numerous car shows throughout the year. In fact, the pair can’t seem to make it to a car show without being photographed in one of their many extraordinary vehicles. One of their most impressive, however, has to be the 1932 Ford Highboy Roadster, which they will drive to this year’s Chrome & Ice winter indoor car show, held at the Dort Federal Credit Union Event Center on Feb. 8, 9 and 10.

Chrome & Ice, the area’s only mid-winter indoor car show, is a place of solidarity and camaraderie, a location established for all of the hopeless ones, for the men and women whom have been stung by the collectible condition. This year marks the fourth annual Chrome & Ice show, which was originally conceived as an affordable, fun and family-friendly way to beat the winter blues and check out some lustworthy automobiles from all over the state and beyond. In its four years, Chrome & Ice has grown exponentially and draws in thousands of automotive enthusiasts.

This year, Chrome & Ice is expanding to include three days of fun and entertainment, promising to be “bigger and better” than ever. The event will feature an amazing collection of super cars immediately upon entry in the lobby, most of which are capable of speeds exceeding 200 mph, along with more than 125 vintage, classic and custom vehicles, sports cars, muscle cars, hot rods and trucks in the building’s two arenas and on the mezzanine at Dort Federal Credit Union Event Center. Also, guests will have access to more than 50 sponsor and automotive-related vendor displays, demonstrations, concessions, live entertainment and a chance to meet Miss Chrome & Ice 2019.

“I’ve been to Back to the Bricks several times over the years,” said Fahoome, “and I’ve been to the Chrome & Ice show every year, but this will be my first time showing at the event. I’ll be taking the ’32 Highboy, so I’m pretty excited.”

“It’s such a great event, especially for something to do in the winter,” said Steve Hobson, Event Coordinator for Back to the Bricks and Chrome & Ice. “This ends up being a big party every year, because we run into all of our friends and we’ve all got our cars there, we don’t have to wear a coat or stand in the cold. It’s a great venue and it’s filled with great cars and great people. Last year, we got that massive snowstorm, so we didn’t quite raise all the funds for the scholarships, but this year we definitely will.”

“The people who put on Chrome & Ice are very generous and accommodating,” said Fahoome. “They’re outstanding people, and they also fuel our car junkie habit through the winter.”

“We’re so happy to have Tom and Peppy and people like them coming to Chrome & Ice,” said Hobson. “They’re great people and they bring such classy cars to our events, which is helpful to us, because our entire goal for these events is to have an economic impact on Flint. The city has gone through some really tough times, so everything we do is free, so we hope that encourages our visitors to go to some local stores and restaurants if you have a couple bucks to spend and make a positive impact on Flint’s economy.”

For more information about Chrome & Ice or Back to the Bricks events, visit their website at www.backtothebricks.org/chromeice 2019/. — Alex Petrie