Chrome & Ice draws car enthusiasts from all over 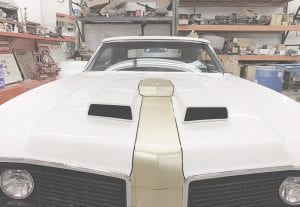 The original 1969 Hurst Oldsmobile 455, pictured here, grabbed Tim Bailey’s attention and he knew he had to have it. Now, after a four-year restoration, he’ll be reunited with the auto at this year’s Chrome & Ice car show, set for Feb. 7-9. Photos provided

GENESEE COUNTY — The annual Chrome & Ice car show brings together all walks of life each year, attracting car lovers from around the country for a weekend of nonstop entertainment and automotive nirvana.

This year’s event, set for Feb. 7-9 at the Dort Federal Credit Union Event Center, will be no different. Tim Bailey, for one, who will be traveling from Tennessee, wouldn’t miss it for the world – because at this year’s event, he’ll be reunited with his 1969 Hurst Oldsmobile 455 convertible.

“I bought a 1969 Oldsmobile Cutlass convertible, which I had turned into tribute, or clone of the Hurst 455. It was fully restored by the Thornton Brothers, who are considered the best A-body muscle car restorers in the entire world,” said Bailey. “They’re second to none. I saw a program on the Speed Channel featuring the Thorntons and it’s what originally got me interested in Oldsmobiles in particular, and I knew if I ever had an opportunity, this is the company I wanted to restore my car.” 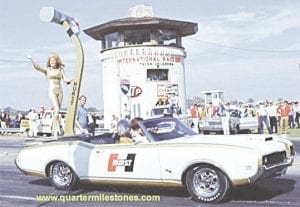 Tim Bailey’s 455, which has spent the past four years in restoration, is finally ready for its unveiling at this year’s Chrome & Ice car show.

Having been born and raised in Flint, Bailey said that he always took a special pride in not only his hometown, but his father’s profession as a master journeyman welder at Chevrolet. It instilled a deep love of cars and a yearning for the rare finds like the 455.

“Under a GM mandate, no GM manufacturer could place an engine larger than 400 cubic-inches in a midsize car,” said Bailey. “Under these rules, the 455-cubicinch engine that Oldsmobile built could only be purchased in larger cars like the Toronado or Delta 88. So, in order to circumvent that rule, Oldsmobile engaged The Hurst Corporation, whereby Oldsmobile sold the cars to Hurst with the standard 400-cubicinch engine standard in the 442 model.”

After growing up in Flint, Bailey says he went on to serve in the US Air Force from March 1986 to July 1991, during which he was involved in Operations Desert Shield and Desert Storm, as well as Operation Iraqi Freedom.

“I was awarded the Outstanding Unit award, Distinguished Service Award and Airmen of the Month award,” said Bailey. “I obtained substantial injuries… These injuries and my service has led to PTSD, depression and other mental health issues. My loving wife and family as well as the outstanding doctors at the Veterans Hospitals across the country have helped me deal with my disabilities and grant me quality of life. As part of my service-connected injuries, my medical doctors recommended that I take up a hobby… I rediscovered my first love of automobiles and the car collecting hobby.”

Along with the 455, Bailey has a number of extremely rare GM cars. But he says he’s looking forward to getting his hands back on the wheel of the Oldsmobile, which has been under restoration for the past four years. He says he considers it a 56th birthday gift to himself, which he’ll celebrate just before Chrome & Ice.

“I want a car that’ll make people stop and ask me about it,” said Bailey. “I like the oddball cars, the Buicks, the Oldsmobiles, the Pontiacs – the ones you don’t always see at car shows. Some of the other muscle cars are a dime a dozen, but you don’t see many of these cars… It’s a beauty, and I’m so proud of it. Kinda like my wife. I just can’t wait for Chrome & Ice. I can’t tell you what it means to me.”

This year’s Chrome & Ice, sponsored by General Motors and brought to you by Dort Financial Credit Union, with special thanks to ABC12, will feature more than 125 vintage and classic sports cars, muscle cars, hot rods and trucks, with live entertainment, special guests and much, much more.