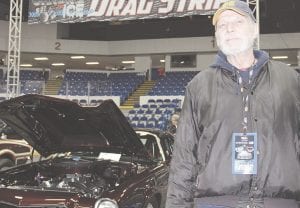 Bob Smith, of Flint, poses for a photo with his 1973 Camaro Pro Street in Black Cherry at this year’s fourth annual Chrome & Ice indoor car show. The event, held at Dort Federal Credit Union Event Center, was hosted by Back to the Bricks and GM and was the largest on record for the organization. Photos by Alex Petrie

BURTON — Back to the Bricks and GM proudly hosted the fourth annual winter indoor car show, Chrome & Ice, which took place February 8, 9, 10 at the Dort Federal Credit Union Event Center. The event was the largest yet, with more than 6,000 attendees and was completely filled, with every available spot in the lobby, mezzanine, hallways, and both arenas booked with more than 125 classic cars.

Chrome & Ice, which keeps car enthusiasts revved up during the cold months, features cars, vendors and entertainment for the whole family. Access to the entire facility enables organizers to showcase vehicles, and a waiting list was started this year for both show cars and vendors due to an overwhelming response from the community.

“Everything went absolutely terrific,” said Event Coordinator Steve Hobson. “It was a perfect weekend and we had over 6,000 people come out to the show. That’s double what it was last year, and about another third more than our best year ever. We just couldn’t believe it.” 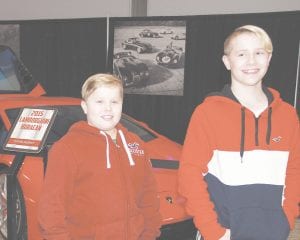 Denver Glasstetter, 11, and his brother, Dakota Glasstetter, 13, both of Grand Blanc, posed for a photo in front of a 2015 Lamborghini Huracan at Saturday’s fourth annual Chrome & Ice indoor car show. This year’s show had more than 125 classic and vintage automobiles and more than 6,000 guests.

Of the registered vehicles at the show, the Top 25 cars were named after the organizing committee tallied a whopping 4,900 votes from paid guests at the event.

“We had our Top 25 named and they were all just beautiful cars,” said Hobson. “They had five chances to win on each ballot and we couldn’t believe how many people voted. Better than the national average. Everyone we talked to said it was great this year. Everyone seemed happy and had a good time, and I’ll be honest, I don’t think we had one complaint. Can’t wait to do it again. We already have some great ideas for next year.”

Proceeds from this event went to support the Back to the Bricks Youth Scholarship Fund.

For more information on Chrome & Ice, or this year’s Back to the Bricks events, visit www.backtothebricks.org. — Alex Petrie