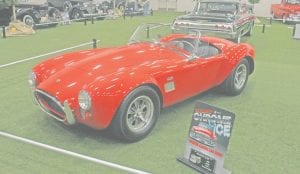 This Shelby Cobra, valued at a little more than $1 million, was the most valuable vehicle on display at the first Chrome & Ice indoor winter car show.

FLINT — Back to the Bricks organizers hoped bringing in some of the country’s hottest cars would be a great way to kick off the new Chrome & Ice indoor winter car show, and they certainly weren’t disappointed.

More than 2,400 people attended this year’s inaugural event, held Feb. 12-14 at the Dort Federal Event Center in Burton. This year’s show featured thirty-five cars in seven categories, with the average value of a vehicle being $200,000. Organizer Jerry Preston said that a 1967 Shelby Cobra owned by George Arakelian was the show’s most valuable entrant at just north of $1 million.

Awards were given to the top entry in each class. A large section of the floor in Arena 2 was covered with sandy to give the entire event a festive, beach party ambience. The overall winner got to circle the ice during intermission at the Flint Firebirds game. 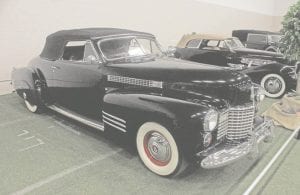 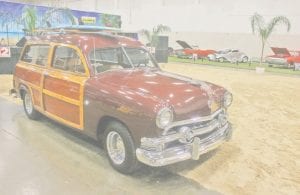 This classic “Woody” looked right at home parked on beach sand in front of the stage. Organizers brought in a well-respected Beach Boys tribute band to add to the beach party theme.