With two of the brand’s three vehicles either recently renewed – from the refreshed flagship and iconic 300 full-size sedan earlier this year, to the completely new 200 mid-size sedan last year – Chrysler is gaining momentum. Add to that the upcoming sixth-generation of the vehicle that created the minivan segment more than 30 years ago, coming next year, and that qualifies for a serious roll.

2015 also marks the Chrysler Brand’s 90th year, which it will celebrate by offering special 90th anniversary models of its 300, 200 and Town & Country models.

“Clearly 2015 is a very exciting time for the Chrysler Brand,” said Al Gardner, President and CEO – Chrysler Brand, FCA — North America. “300 now harkens back to the 2005 model that started it all, 200 has taken flight in a big way since it’s re-introduction in the hotly contested mid-size car segment, and Town & Country continues to lead the minivan segment it created, ahead of an all-new version – that will include a hybrid – planned for introduction next year.” 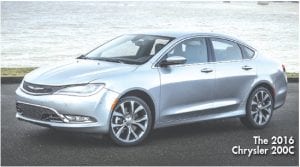 Chrysler 200 – Captivating drivers and passengers with its simple elegance, an extraordinary driving experience, and cool features – all a value customers will appreciate 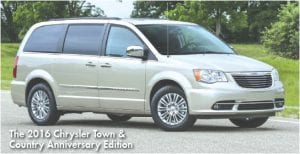 The 2016 Chrysler 200’s 90th Anniversary Package also reflects the tenets of the Chrysler brand – a car that is packed with features that customers value, at a price they appreciate. In addition to features already standard on the 200 Limited model, the 90th Anniversary Package adds as standard equipment: 8.4-inch touchscreen radio with UConnect Access and SiriusXM Radio, sunroof, Convenience Group (oneyear