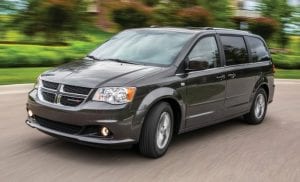 The minivan has been a part of the American driving experience for a while now and it’s hard to believe that there was a time when it was a brand-new segment of the market.

The first Chrysler Group minivan rolled off the assembly line on Nov. 2, 1983, sparking a new segment of people movers that rose in popularity very quickly, transporting millions of moms, dads and kids, and becoming part of their families.

Having sold more than 13 million minivans since first introducing the segment in 1983, and creating 78 minivan segment firsts, such as class-exclusive Stow ’n Go seating and a segment-first Blu-ray rearseat entertainment system, the Chrysler Town & Country and Dodge Grand Caravan are celebrating their heritage with 30th Anniversary Editions available this fall.

“The Chrysler Group is well-known as the creator of the minivan, and these 30th Anniversary Editions are the perfect way to celebrate their leadership and longevity in the marketplace,” said Ben Winter, vice president of Vehicle Engineering. 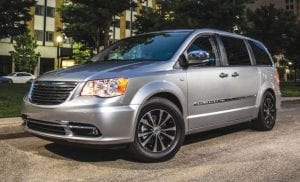 “As the minivan segment and innovation leader, it’s important that we continue to offer tremendous content and value, setting us apart from the rest of the segment.”

John McElroy, host of the web site Autoline and WWJ radio commentator, said the minivan was a transformational vehicle.

“Consumers had been saying that they wanted something like the minivan for years,” McElroy said. “But it took a company like Chrysler, which had just come off financial difficulties in 1980 and 1981 to have the guts to actually make the first one.”

McElroy said the minivan was the brainchild of Hal Sperlich, who had the idea while he was working at Ford.

But, McElroy said, Sperlich was fired and ended up at Chrysler about a year before Lee Iacocca was fired from Ford and went to Chrysler. So when Iacocca arrived at the company, the idea of the minivan was again floated. This time it was accepted. At that time, McElroy said, Chrysler really only had one platform – the K car platform. The company had to milk it for all it was worth while it was developing new platforms.

“Sperlich told Iacocca that they could stretch the K car platform out and build a minivan,” McElroy said. “It was given to the truck division and they really engineered it, so when it came out, it was bulletproof. The rest, as they say, is history.”

McElroy said that trucks by their nature have to be tougher than cars, so when the truck division was asked to engineer the first minivan, “they did it the way they usually did things. The result was a vehicle that was really well designed and was tougher than a car.”

To this day, McElroy said, Chrysler’s minivans are classified as trucks. And Chrysler has never dropped the ball with minivans. While they no longer have the market segment to themselves, Chrysler is still the leader.

The Dodge Grand Caravan was the topselling minivan in the world last year and combined with the Chrysler Town & Country, accounted for nearly half of all minivan sales in the United States in 2012, McElroy said.

The 2014 Town & Country 30th Anniversary Edition is based on the Touring-L model and features unique exterior and interior content. All Town & Country models come equipped with the awardwinning Pentastar 3.6-liter V6 engine with a class-leading 283 horsepower and a refined six- speed automatic transmission.

The 2014 Dodge Grand Caravan 30th Anniversary Edition will be available on both the SE and SXT models.