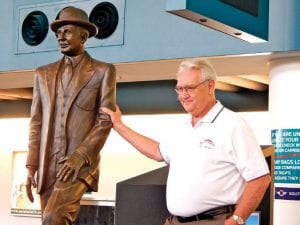 FLINT TWP. — Automotive pioneer Walter P. Chrysler was an avid gearhead who tore apart his first car to learn how everything worked then put it back together before he even learned how to drive it, according to Jeremy Dimick, curator at Sloan Museum, who was one of several speakers Monday at the unveiling of a bronzed statue of Chrysler now on permanent display at Bishop International Airport.

Standing atop a baggage claim carousel, Chrysler is poised to deliver an automotive history lesson to the one million-plus people who fly in and out of Bishop each year.

Those numbers were enough to persuade Al Hatch, chairman of the Back to the Bricks Car Cruise and Statue Committee, that the airport would be a prime spot for some of the automotive pioneer statues being created for “strategic” placement throughout Genesee County. So far, three of them -David Buick, Louis Chevrolet and Billy Durant – have been placed in downtown Flint. Chrysler is the first to be installed at Bishop and will be joined next year by Charles Nash. 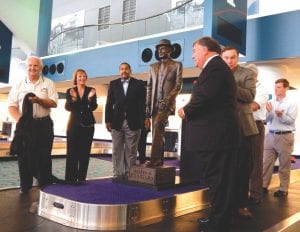 Chrysler’s statue is flanked by a scrolling monitor conveying his significance in Flint’s automotive history.

Hatch said he envisions the statues becoming a tourist attraction befitting the birthplace of General Motors.

“To the best of our knowledge this is the time this has happened in North America,” he said, adding that he would not be surprised to see similar tributes popping up at airports across America.

“We think that it is significant to tell the story of the automotive industry,” Hatch said of the BTB statues project.

People spend 10 to 15 minutes at the baggage claim waiting to retrieve their luggage, Rice said. The statues will give them something to do while they wait.

“One hundred or so people per flight are going to read it,” he said. “People who did not know that Chrysler (started in Flint) are going to learn something.”

Young people unsure about what to do with their lives may draw inspiration from it as well, he said.

Dimick shared additional background about Chrysler’s time in Flint circa 1912-1919 before moving on to Detroit to start his own car company in 1925. He was named Time Magazine “Man of the Year” in 1929 which puts him in league with presidents, popes, Gandhi and iconic figures, Dimick said.

Remarks were made by several local officials including Flint Township Supervisor Karyn Miller, sculptor Joseph Rundell and Leven Weiss, of the Chrysler Group.

Miller said Bishop which is partially located in Flint Township is the gateway to Genesee County. Everyone who comes down the escalator is a visitor to Flint Township (first), she said. The statues will raise awareness that the automotive industry began here, she said.

Rundell, a firearms engraver based in Clio, said he’s transitioned from making faces the size of a postage stamp to full sized heads but it has been a labor of love. He has sculpted four statues and also completed heads of Nash, Charles Steward Mott, Charles F. Kettering and a few others.

On behalf of the 70,000 men and women who work for the Chrysler Group, Weiss said they strive to uphold the legacy of innovation that Chrysler started 88 years ago. Several “engineering firsts were in the model car Chrysler debuted in 1924, he said. Since the federal financial bailout in 2009, Chrysler has bounced back to invest more than $5.2 billion in the company and create more than 22,000 jobs.

“Our sales have increased for 41 consecutive months on a year to year basis,” Weiss said, noting that success is the ultimate way to pay tribute to the man who left such a great automotive legacy.