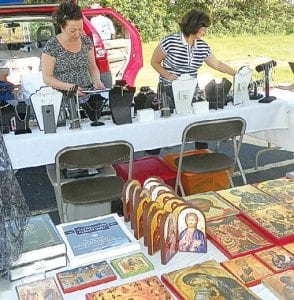 Vendors setting up jewelry and items from the church bookstore to sell at the St. George Orthodox Church Middle Eastern Festival August 26-27.

“There is nothing better than good Arabic hospitality,’’ said Ghattas, festival chairman. “We are here to have a good time and to celebrate with our friends and our neighbors.’’

A live band, belly dancers, food vendors and even a hookah smoking tent were some aspects of Middle-eastern culture on display.

A hookah is a traditional water pipe found all over the Middle East, said Ghattas, who described it as the safest smoke you can have because it is filtered through water.

“First and foremost we are Americans and we love our country,’’ Ghattas said. “But we also cherish our Middle Eastern culture. We want our neighbors to see and feel our hospitality and our culture.”

The church revived the festival last year after nearly a 40-year hiatus, Ghattas said. Last year’s one-day event was so successful they decided to try a two-day event this year and hope to continue annually. 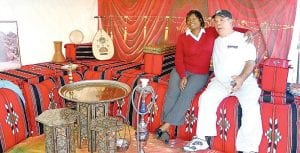 Above: Friends Regina Broomfield of Grand Blanc and Basil Andoni of Swartz Creek pose in the cultural photo set-up with Arabic artifacts including a hooka pipe. Left: Food preparers working in the food tent.

They were hoping for more than 4,000 people to come, doubling last year’s attendance.

Proceeds go to charities and to help the poor. Ghattas said the church supports a soup kitchen and is committed to helping the poor year-round. 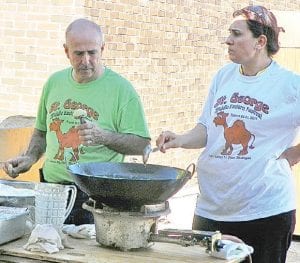