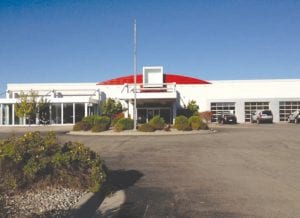 Kingdom of Heaven Ministries has purchased this former Saturn dealership on Dutcher Road.

FLINT TWP. — If you’ve been curious about people seen moving about inside the former Saturn dealership on Dutcher Road, they are about the business of saving souls — not selling cars.

Kingdom of Heaven Ministries is the new owner of the building at 2430 Dutcher Road, that housed a dealership until 2009 when General Motors pulled the plug on its Saturn brand.

Church leaders did not respond to a request for comment but an October 27 announcement on the church Facebook page said: “It’s official!! Kingdom of Heaven Ministries is moving to 2430 Dutcher Rd in Flint Township. To God be the Glory!!

Tracey Tucker, Flint Township economic enhancement director who is charge of building inspections, said the new owners have pulled permits to convert the building to meet code for use as a church.

The property is zoned C-2 which is in conformance with becoming a church but earlier this month township building inspectors called a temporary halt to interior changes being done without the proper building permits.

Now all necessary permits have been pulled and the church organizers have a green light to make necessary changes. That includes installing drywall to seal off bays where car repairs and oil changes were done by the dealership – to make the area nonaccessible to children, Tucker said.

She also said it is her understanding that the church’s long-range goal is to convert the former oil bays into the sanctuary.

But for now the existing showroom is large enough to seat nearly 300 and does not require a lot of work, she said.

The non-profit use takes the former business off the tax rolls, but is a good fit for the church, Tucker said.

She does know the church’s timetable for completing the conversion but said they have to come back to the building department for an occupancy permit.

The township is keeping a closer watch on businesses being converted to churches after some problems with another church that made changes without a permit to a former commercial space it occupied in the Kroger plaza on Corunna Road.

Tucker said township building inspectors have met with Kingdom of Heaven administrators to specify what is permissible inside the building. For one, they were advised to stop building a non-complying stage. Also there was some discussion about using an upper floor as a children’s playroom and offices but Tucker said they must be careful of square footage and uses that would require installment of an elevators, which can be expensive.

The church’s former location was on Pasadena Avenue, according to its website.