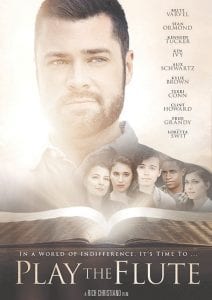 Pastor Gary Cech, lead pastor at Grace Community Christian Fellowship, 3707 Davison Rd., in Flint, said he and his congregation are fans of previous films by director Rich Christiano, having shown three other of his films at movie nights at the church.

“This is a really well-made film, one that challenges your faith,” said Cech. “It challenges you and asks where are you and what are you doing for the Kingdom? It asks the viewer to keep from being indifferent.”

To play the flute means to be out there “living your faith”, he said. Not on a soapbox, said Cech, but just living it to make a difference in other people’s lives

Christiano’s other films include The Secrets of Jonathan Sperry, Time Changer and a Matter of Faith, all faith-based stories with a message of hope and spirituality. He said this film, like the others, deal with lots of issues in a nonjudgmental way. 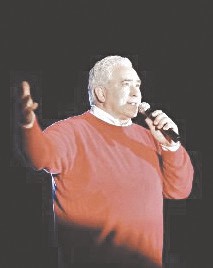 Play the Flute is about students at a church where a new youth director comes to serve, and it turns out it’s the same church he attended when he was a boy. The movie stars familiar television actors Loretta Swit (M*A*S*H), Fred Grandy (The Love Boat) and Clint Howard, Ron Howard’s brother.

Cech said Christiano is an independent filmmaker who tries to get the word out about his films by connecting with local churches. He books the film with the local church, gets them to support it and then brings people to the theatrical showing through word of mouth.

Tickets for this movie will not be on sale at the Rave box office.

He said during the showing there will be a treasure hunt and a drawing for the DVD bundle of Christiano’s other films.

Cech said his own love of movies goes back to when he was young. He said from age 4-17 his parents owned movie theaters in Elsie and Flushing – as well as one later in Holly.

“I grew up in movie theaters,” he said. “I developed a real love for film.”

Cech added he thinks Play the Flute is a very good film. He said he and Christiano have formed a friendship from their conversations and found out they were even baptized in the same church, the same year a couple of months apart in 1980.

“I’m doing this because I believe in this film and it’s message,” he said. “Rich and I have many friends in common from my time when I lived in Hollywood, so it’s been fun to forge a friendship over this past year and I am enjoying promoting this film.”