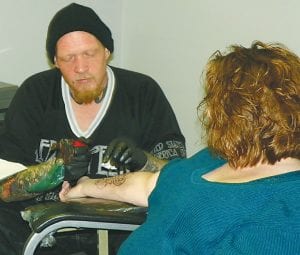 Drew Blaisdell, tattoo artist and church member, works on a tattoo for Cortney Spalding at Serenity Tattoo inside The Bridge Church on Corunna Road.

FLINT TWP. — Life became anything but serene after word spread that the Serenity Tattoo parlor is being operated at a storefront church in the Carman Plaza on Corunna Road.

Two local TV news crews showed up the same day the article was published in The Flint Journal in early January, said Steve Bentley, pastor of The Bridge Ministries, a nontraditional church located in the strip mall at 3326 Corunna Rd.

Calls seeking interviews have since poured in from as far away as Germany and Australia and stories have appeared in the national media including CNN, USA Today, Good Morning America, Fox News, Businessweek and numerous religious publications.

Bentley is glad to draw attention to the church’s mission to appeal to people who otherwise would not attend church but they did not seek it, he said.

The idea started last fall to help Ryan Brown, a church member and recovering alcoholic, who also is a tattoo artist. 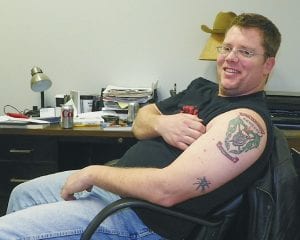 Practicing what he preaches. Pastor Steve Bentley of The Bridge Ministries, a non-traditional church on Corunna Road, shows a new family crest tattoo he designed to reclaim his once rejected heritage.

“Ryan came in here looking for help with his addiction and his spiritual life,” Bentley said. “We just helped him get on his feet.”

The church occupies five storefronts in 33,600 square feet. The tattoo parlor is set up in an area separate from where services are held that would otherwise have been an office.

Brown was joined by Drew Blaisdell, a recovering addict and tattoo artist for 16 years. A confessed atheist before, Blaisdell has been baptized and become an active church member. With Bentley’s permission, he contacted a high school friend who is now a journalist, seeking to promote the fledgling business.

They expected a small article buried inside the paper. Instead it appeared on the front page and exploded via wire services, bringing widespread feedback from the religious and secular community. Response has been mostly positive but divided between support for what the church is doing and those who charge that tattoos go against Biblical teaching, specifically Leviticus 19:28 forbidding cuts or permanent marks on the body which some interpret as not having tattoos. Bentley counters back with scripture against cutting facial hair and other ancient cultural standards to live by that were not com- mandments, he said. 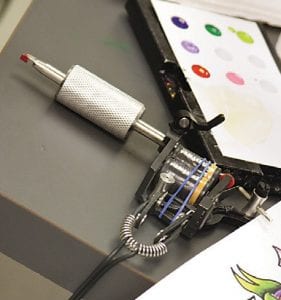 “If I was convinced that the Bible said no tattoos, I would shut it (Serenity) down and have mine lasered off,’’ said Bentley, who has two tattoos.

Parents of three children, Bentley and his wife, who started the church in 2008, saw the tattoo parlor as a positive outreach mission.

The sign out front of the church advertises it as “a different way to do church.’’

About one-third of an estimated 1,000 people who attend the church are in recovery from chemical addiction, Bentley said. Others are dealing with serious life issues such as abuse or co-dependency.

“Since we started here, we literally have about 600 people that weren’t going to church anywhere that are going to church now,” said Bentley, who was ordained in the Nazarene church nine years ago but not seeing the results he is getting since starting The Bridge, which he prefers to call an interdenominational church.

Since the article came out, Bentley’s also heard from detractors that the tattoo business is using the church’s non-profit status to avoid paying taxes. He said the artists, as registered small business owners, pay taxes on their earnings like everybody else. They make a donation to the church to cover utility costs but don’t currently pay rent.

The church also has opened its doors to a martial arts academy using its gym, a Zumba instructor, fitness trainer and a semi-pro wrestling group that hosts shows every other week.

“There are literally billions of square feet (in churches ) that sit empty all week long,” Bentley said “I think that is so wasteful of what God has blessed us with.”