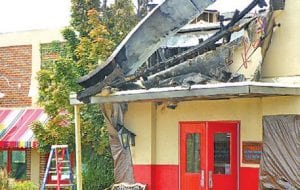 Restoration crews were on the scene Monday morning at Don Pablos restaurant after a fire there on Sunday.

The fire was believed to be caused by a carelessly discard cigarette, said Fire Chief John Ringwelski, in a report to the township board of trustees Monday night.

A combination of dry mulch near the door and a breeze were enough to spread the cigarette flame, he said.

“It doesn’t take much,’ ”Ringwelski said of dry conditions due to a long spell of hot, dry weather.

One firefighter suffered heat exhaustion while fighting the fire on an already hot day and was treated and released at a local hospital, he said.

The fire started inside the front wall of the restaurant behind a facade bearing its name. It was not initially visible from the outside, but spread inside the wall until smoke started pouring inside. Everyone in the restaurant was safely evacuated.

The fire created enough heat to activate the sprinkler system the attic which kept the fire in check until fire crews arrived to extinguish it.

Ringwelski said they called in the City of Flint aerial truck and also manpower assistance from Mundy Township.

It was the second fire at Don Pablo’s in just over a year. A fire in May 2011 also was blamed on a discarded cigarette butt igniting nearby brush.

Treasurer Sandra Wright asked Ringwelski if a cigarette receptacle could be placed at the restaurant in light of its second fire in a year. Ringwelski said there’s already one there, but restaurant operators were in the process of replacing the mulch with rocks.

On a similar note, Ringwelski issued a public plea to smokers to be more careful with cigarette during this dry weather spell.

Dried material igniting does not happen often, but there have been several occurrences at restaurants along Miller road because of burning cigarettes getting tossed into mulch outside the door, he said.

A butt tossed out of a car window on the freeway can also create a hazardous situation, he said, noting that he’s heard about multiple freeway grass fires south of here.

Also at least one grass fire in the township was known to be caused by fireworks and there were others of unknown origins, he said.

“The dry grass out there is enough to ignite from a basic cigarette,” he said, “Anybody with open flames should be very careful.”