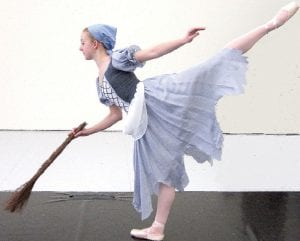 FLINT — A familiar story to those young and old will take on new life when Young People’s Ballet Theatre (YPBT) presents the ballet, Cinderella, March 3-6 at the University of Michigan-Flint Theatre, 303 E. Kearsley St.

Dale Brannon, YPBT’s choreographer, has created an all new Cinderella to music by Jules Massenet said Denise Paavola, artistic director for YPBT. Massenet completed his score for an opera called Cendrillon (Cinderella) in 1895. Most ballet companies in the United States now perform a version of Cinderella using Sergei Prokofiev’s 1945 score.

The Massenet score is beautiful, with refreshing music for the group’s soloists, lighter passages for the fantasy scenes, and in general, less dissonance throughout the ballet. The basic story line follows the retelling of the story by Charles Perrault who wrote Cendrillon, ou La petite Pantoufle de Verre in 1697 (Cinderella, or The Little Glass Slipper). Using Massenet’s music, Brannon has revised the structure of the ballet and has added choreography and magical scenes appropriate for our dancers and our audiences. 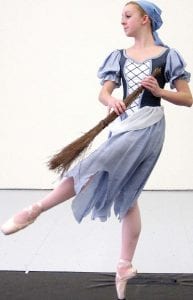 Hannah Buggy will dance the lead role in Cinderella.

Cinderella is a classic fairy tale about a sweet young woman who must live an oppressed life because her stepmother is mean and selfish. When the family is invit- ed to the Prince’s Ball, Cinderella is left behind because she has nothing to wear. Her Fairy Godmother appears and with the help of magic, she creates a carriage, a beautiful dress and a pair of crystalline shoes so that Cinderella can attend the ball. There she meets the Prince of her dreams. When she has to leave the ball at midnight, she loses one of her slippers. The Prince, who has fallen in love with Cinderella, decides she is the one he will marry and so begins his quest to find her. 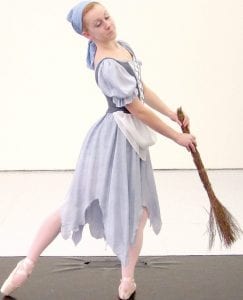 Brannon originally trained in Indianapolis, and then studied and danced with the Stuttgart Ballet in Germany where he was influenced by many famous choreographers, including John Cranko, Tetley, MacMillan, Neumeier, Kylian, Forsythe and Erik Bruhn. Upon returning to America, he was a principal dancer with Ballet Met in Columbus, Ohio, and then the Louisville Ballet in Kentucky. Presently, he teaches in Radcliffe, Ky., and restages his ballets on other youth ballet companies like YPBT. Brannon has choreographed several original ballets on YPBT since 1991.

“In fact, we call him a ‘Pied Piper’ for young dancers who love the art of ballet,” Paavola said.

The guest artist, dancing the role of the Prince, is Alan Obuzor, a former dancer with Pittsburgh Ballet Theatre and currently, a freelance artist. He began dancing with the Pittsburgh Ballet Theatre School when he was 9 years old and received a contract with PBT by the time he was 17. While in school, Obuzor was the recipient of the prestigious Princess Grace Award and has had many prominent choreographers originate roles on him. He has also choreographed many of his own ballets in Pittsburgh and has reset a few on YPBT for our Spring Gala. “Alan is a tall, technically pristine and graceful dancer who commands the stage,” Paavola said.

“Our ballet company, which is celebrating its 23rd season, is comprised of 27 very talented students of ballet,” Paavola said. YPBT is a youth ballet company with dancers between the ages of 8-18 from Flint, Flint Township, Swartz Creek, Flushing, Davison, Grand Blanc, Durand, Fenton, Clio, Rochester Hills, and the Port Huron area. YPBT is a non-profit, 501 c.3 tax-exempt organization, dedicated to bringing story ballets to the stage and offering professional choreography and training for students while working on productions.

A special discounted performance for groups will be held 6:30 p.m. March 3. This is the only performance set aside for groups at the discount rate this year. All performances, including the Thursday performance, are open to the public. Tickets are $10 for adults, $8 for children ages 12 and under.

For tickets and information for Cinderella, call Carrie Nettleton, ticket manager, at 810-230-7821. For more information, visit the group’s website at www.ypbt.org.