Citizens Bank and HealthPlus square off in the Fitness Feud 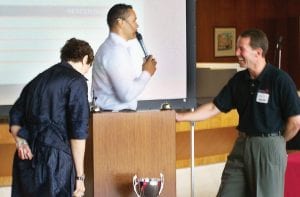 Citizens Bank President and CEO Cathy Nash, left, and HealthPlus of Michigan President and CEO, Bruce Hill, right, listen to instructions from emcee Pete Thomas at the start of the Fitness Feud.

The organization with the highest average amount of activity per employee will win the challenge.

At the kickoff held June 6 at the Citizens Bank central branch in downtown Flint, HealthPlus and Citizens Bank employees competed against one another in a “Fitness Feud” game emceed by Season Two “at home” winner of NBC’s The Biggest Loser and HealthPlus spokesperson Pete Thomas.

While HealthPlus walked away last year with the coveted “Nash-Hill Cup” for the Fitness Feud event, this year Nash and her team came back to win the event.

“We thought it would be good to take the energy our two companies have and put it to good use,” said Nash, prior to the start of the event.

More than 1,300 employees between the two companies took part in the challenge last year. The event promotes the importance of physical activity to the workforces of both companies and to the community.

At the Fitness Feud, Nash, Hill and their colleagues answered questions like “what are the benefits of exercise?” and “what are the most common signs of stress?”

The questions were offered up by Thomas and the teams gave their answers in the same format as the TV game show Family Feud.

In the end, Citizens Bank won.

But according to Hill, it iasn’t all about winning or losing.

“What you are doing here today is setting an example for the community,” he said, addressing employees from both companies prior to the game. “You’re making the community a healthier place to live, to work and to play. You are a contributor to this community.”

The results of the contest between the two companies will be shared with the community after the eight week challenge is over.