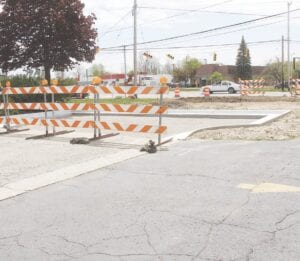 BURTON — Residents may have noticed current construction at Columbine Avenue at Maple Road and Saginaw Street has made it so that street no longer feed into the once five-way intersection.

City Council President Steve Heffner asked Charles Abbey, director of the Department of Public Works, May 3 why Columbine Avenue was being closed at the intersection, saying he did not recall voting for such a move.

“When I voted to pave Saginaw Street I didn’t vote for Columbine (Avenue),” he said. “We need to check into this. If this is the DDA (Downtown Development Authority) the money needs to come out of the appropriate budget.”

Abbey said the closing of Columbine Avenue at the intersection of Saginaw and Maple has always been part of the plan It is part of the project and is included in the 80-20 percent match with the Michigan Department of Transportation which is funding the reconstruction.

Also, he said last year there were 21 traffic incidents at that intersection involving accidents of some type, which further suggested Columbine needed to be closed there.

The idea with closing the intersection to traffic on Columbine was also to beautify that corner and place a “Welcome to Burton” sign there with a park bench much like the entrance to Davison Township off I-69 on Irish Road, said Abbey

“Aesthetically the idea is we want to do several of those around the city to bring some curb appeal to the city,” said Abbey. “We want to do one off the express way, off 475 maybe on Bristol Road. At all those various points of entries from other communities, whether it be Davison Township, Flint, Grand Blanc Township or Flint Township.

“If the council has different ideas, you need to let us know that.”

Heffner said he understood the other reason for closing Columbine at the intersection is because MDOT wanted it closed.

Abbey agreed, saying MDOT has been trying to get that intersection closed for years because they don’t like “that fit.” Intersections with what MDOT calls 5-points of entrance are always targeted for closure wherever they can because the state wants a straight, four-section intersection.

Heffner asked for a copy of the letter where MDOT said they needed to close that intersection and Abbey said he would investigate providing one.

“When I look at Flint and Grand Blanc, they have the big arches over Saginaw street and they really, really look first class,” he said. “If we’re going to do that, let’s do it right not some little sign off to the side. The aesthetics really do something. I think we should look at that before we purchase a sign that says “Welcome to Burton”

Abbey said it was nice to heart the council president’s idea and agreed such an arch would look nice, but added it wouldn’t work everywhere, but would work on Saginaw Street. He said the DPW would have to have an arch engineered and get a cost together to bring to the council for its consideration.

“I think changing the speed limit on Saginaw Street and making it uniform is the right thing to do,” said Abbey. “Like I said, you have two different speed limits from Flint and Grand Blanc Township. Make it more consistent with what the traffic patterns are. I think it’s all good, you just got to determine what it is.”

The board could consider a suggested traffic control order at its next meeting, May 17.