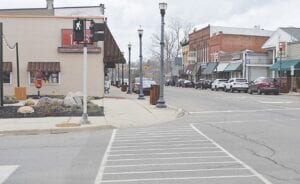 Crosswalks in downtown Flushing, including this one at the corner of Main and Cherry streets, could soon be equipped with APS enabled traffic signals to aid pedestrians with hearing or visual impairments. Photo by Ben Gagnon

FLUSHING — The City of Flushing is exploring options for making the downtown area safer for residents with disabilities and/or visual and hearing impairments.

At its March 8 meeting, Flushing City Council received a cost estimate for pedestrian traffic signal and ADA ramp upgrades at Main Street and Maple Street and Main Street and Cherry Street. According to the report, which was conducted by City Manager Clarence Goodlein, the current estimate for both improvements would be $65,670. Around $50,150 would be for pedestrian crossing-signal upgrades and $15,520 would be for ADA sidewalk, curb and ramp upgrades.

Flushing is considering the safety upgrades after receiving a request from the Flushing Lions Club to install APS enabled pedestrian traffic signals at the downtown area’s busiest intersections. The signals would be equipped with audible cues for visually or hearing-impaired walkers to help them safely cross Main Street as they shop downtown or go out for a leisurely stroll.

Signal upgrades would be made by the Genesee County Road Commission, which maintains signalizations at the intersections through downtown Flushing and other communities.

Although funds have not been allotted for the upgrades in the current budget year, Flushing Mayor Joseph Karlichek said that the city will look at the next fiscal year as a possibility for both projects. He also said that a planned Michigan Department of Transportation (MDOT) road repair project on the 100 and 200 blocks of Main Street for 2022/2023 fiscal year will likely include ADA upgrades, thereby reducing the cost for the city.

“We expect that there will be TIP (Transportation Improvement Program) funds from MDOT to complete ADA sidewalks, curbs and ramps with the road project,” Karlichek said. “We should also be able to come up with funds to complete the projects for specific traffic signals that would be needed to help people with visual or hearing impairments.”

The city will also look to apply for state and federal traffic safety grants that may be available during the 2022/2023 fiscal year.