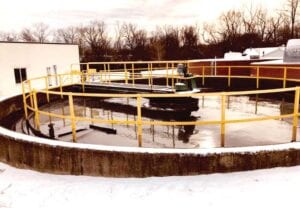 An outside view of the city’s wastewater treatment plant. Photo provided

FLUSHING — Flushing City Council is weighing the pros and cons of possibly turning over the city’s wastewater operations to Genesee County.

At a special meeting held last Thursday, the council listened to a proposal from the Genesee County Drain Commission and discussed the future of the City of Flushing’s wastewater treatment plant (WWTP). John O’Brien, Division Director for the GCDC’s Water and Waste Services, spoke on behalf of the GCDC.

O’Brien said that if Flushing decides to hook up to the GCDC’s wastewater system, the city could agree to a retail community bulk rate structure or go with individual water meters. The rate charge with the community bulk rate would be $2.07 per 1,000 gallons of water consumed, plus a minimum $500 surcharge per month for the city. The rate charge for individual water meters would be $2.43 per 1,000 gallons, plus a minimum charge of $4.67 per month per unit.

O’Brien also said that the county would demolish the treatment plant and acquire the property for GCDC office and operations space.

Although the city council did not make a definite decision on the county’s proposal, Flushing Mayor Joseph Karlichek said that the city needs to make careful considerations before spending between $4 to 6 million to hook up to the county’s wastewater system.

“The city will be faced with increased sewer rates whether we go with the county or stay with our wastewater treatment plant,” he said. “Our rates (with the WWTP) might be a little more, but we would control our own destiny here.”

Council members also discussed the drawbacks of continuing to run the aging WWTP, including high upgrade and maintenance costs; the city’s current problems with inflow from sub pumps and issues with leaky sewer pipes; and the difficulty of finding workers to operate the plant.

After hearing O’Brien’s proposal, the council voted to proceed with scheduled upgrades to the WWTP and pursue an additional $5.64 million in loans from the USDA to cover project costs. The city had previously accepted a $3.25 million USDA loan to upgrade the WWTP but needed additional loan money after bids came in higher than initial project estimates.

The council also approved a motion to direct city administration to proceed with a proposed rate study of the city’s wastewater system and direct Flushing City Attorney Matt McKone to research ordinances for point of sale inspections.

Flushing’s original wastewater treatment facility was built in 1958, and a newer facility used for sludge treatment was constructed in 1972.