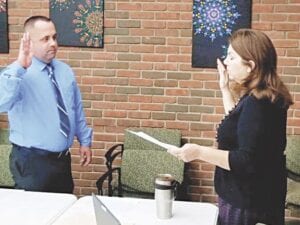 FLUSHING — The Flushing City Police Department has promoted of one its part-time officers to full-time status.

Officer Erick Eckles, who has worked part-time for the Flushing City Police Department since 2015, was sworn in as the force’s newest full-time officer on Oct. 12 at the Flushing City Council meeting. He will be filling an open fulltime position that was vacated in 2017 because of a retirement.

Eckles was raised in Flushing and graduated from Flushing High School in 1998. He obtained his Associates of Science degree from Mott Community College before graduating from the Flint Police Academy in 2006.

Eckles started his law enforcement career in June 2007 with the Clayton Township Police Department and has also worked with for the cities of Clio, Vassar and Thetford Township as a part-time officer.

During his tenure in Flushing, Eckles has received two letters of commendation from residents who thanked him for his service to the community.