Republic Waste to answer questions at next council meeting 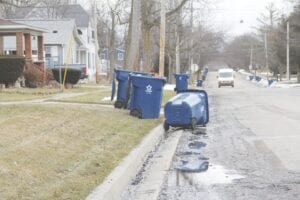 DAVISON — A representative of Republic Waste will be at the March 8 city council meeting to address concerns from both the council and the public.

The company serves as waste hauler for the City of Davison, but some city officials have questions regarding the pickup of large items and the leaving behind of trash spilled from containers during waste disposal.

City Councilman Chris Hinkley said Republic Waste has been a “thorn” in his side for some time, with scheduled pickup supposedly beginning at 7 a.m., but with trucks often arriving as early as 6:15 a.m.

Because he lives on a dead-end, Hinkley said the truck typically makes four trips up and down his street and as many as 12 trips during the summer months when they are picking up garbage, recycling and yard waste.

While the noise of the truck is unavoidable, he said he has experienced inconsistency in pick up and said he’s heard other residents complain about it as well. Republic, he said, often doesn’t pick up large items, which they are supposed to send another truck back for when they see items that won’t fit in the typical garbage truck.

“(Republic Waste) said sometimes it’s just the driver and the mood he’s in that day, which to me is completely unacceptable,” said Hinkley, “if we’re paying them as a community, for a service to be that inconsistent throughout the city.”

Last year, he said he put some small windows out to the curb to be picked up after remodeling his shed and the garbage truck refused to pick them up. When he called the company, he said they told him they were going to charge $17 a piece to come back and pick them up.

“To me, that’s kind of ridiculous,” said Hinkley. “I don’t think we’re getting the service we deserve for the money we pay them.”

Code Enforcement Ken Skunda said where furniture pickups are concerned, Republic Waste is “dropping the ball” in failing to send back a bigger truck the next day to pick up large waste items.

Councilwoman Jessica Abraham said she has observed trash falling out of the containers, when they are lifted and dumped into the truck by mechanical arm, and the drivers don’t get out to pick up what’s been dropped.

Calls were exchanged with Gary Hicks from Republic Waste, but the Index was not able to speak with him prior to deadline. The city said he will attend the March 8 meeting at 7:30 p.m. on Zoom.