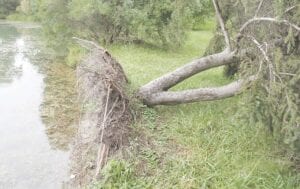 A fallen tree on the east bank of Kelly Lake in Burton. Photos by Gary Gould

BURTON — Often heavy downpours of rain this summer have raised the level of Kelly Lake, which has caused a soil erosion problem on the east bank of the lake.

Council President Steve Heffner pointed out to the city council Sept. 8 that one tree has already fallen over due to the eroding bank and another will soon suffer the same fate unless something is done.

“I’d like to talk about Kelly Lake,” said Heffner. “We got a problem and we’re going to have to address that east bank of the lake.”

Heffner said he noticed the damage during a recent visit to the Burton park and told the council the city would have to put some attention into it, or risk losing more trees.

Department of Public Works Director Charles Abbey said the soil erosion is only one of the issues needing to be addressed at Kelly Lake. He said a lot a debris in the water, especially under the bridge where there are empty water bottles and other trash that needs to be cleaned up. 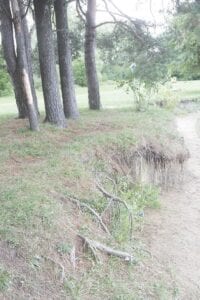 He said he’d go out the lake and have a look at the soil erosion to see what can be done.

Heffner said he thinks building a seawall using decorative blocks made by a company on Torrey Road would be an easy fix for the problem.

“I think that would be our most inexpensive way, hire somebody to come in and put those blocks in,” said Heffner. “Has anybody been to Outdoor Adventures (in Richfield Township)? I’ve seen their wall they have there, it’s similar. It looks nice and it’s a local, Genesee County company.”

No action was taken Sept. 8, but Abbey said he would assess the situation.